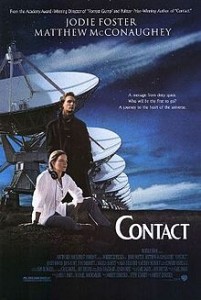 Unlike the film I will endeavour to keep this brief.

Ellie (Jodie Foster) has been fascinated by all things space since her youth, inspired by the continued interest of her Father (David Morse), the requisite Great Dad who passed away when she was young.

All of a sudden, it seems everyone that previously dismissed Ellie and her rogue crew of quirky science-type characters thinks she’s a visionary with the discovery of the millennium, only in truly misogynistic fashion they all essentially say ‘thanks Toots, we’ll take it – and the credit – from here’.

But Ellie refused to merely step back into the kitchen, this is her discovery and she wants in…

Contact is chock-full of over-reactions. I understand that the discovery of alien lifeforms would be a big deal regardless of the exact details, but do we need the film to be an hour longer than it needs to be to fit all the political posturing and manoeuvring in?

Add to this the totally unnecessary inclusion of Matt McConaughey as an over-earnest, disarming, hippyish Matt McConaughey type named Palmer Joss and you have an overlong, overly serious, often confusing and frequently boring film, albeit one with a couple of scenes that grab momentary attention.

Films like Aliens, X-Tro and Predator show us that first encounters might be dangerous, Close Encounters of the Third Kind brings wonder and awe, Contact has all the joy and tension of a form filling exercise.

Final Rating – 6.5 / 10. Fans of this might spout the X-Files mantra “I want to believe”. I might retort with “I just want to be entertained. Even a little…”