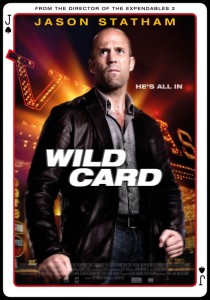 Nick Wild (Statham) is a man of many skills leading a non-descript life amid the hubbub and craziness that is Las Vegas. Nick Wild knows everyone and plays the odds of every potential move in advance. As the film opens he is playing the safe bet at all times. In fact he is sitting out the game altogether, preferring to take a couple easy scores in low stakes gigs.

But of course there’s no fun watching the best player in the room if he’s sitting on the wall and not at the table.

Wild is forced to skooch his chair forward when a longtime acquaintance announces she has been raped by some well-funded and well connected thugs. But even then his initial due diligence impels him to decline the job.

Even though this is ‘plot development’, it means less action, and unnecessary delays before the main act gets to strut his stuff.

Fortunately the first stoush makes the wait very nearly worthwhile. This initial action sequence is absolutely nailed, while it doesn’t save the film it definitely reminds you why you opted for a Statham movie again. There are two further action scenes that don’t quite work as well, but two Statham action scenes are better than none. (6 is obviously better…)

Then it’s back to the window dressing. Obviously the film’s primary asset and reason for existence is Jason Statham, a gruff voiced, charismatic and physically gifted man known for his action chops. The centrepiece of Wild Card is a fifteen minute gambling session.

For some reason it has been decided that card games are ripe for suspense and tension. The reality is that while an action sequence on face value can be predictable, it nonetheless involves creativity, physicality and choreography; card games involve being able to add or know what hand is bigger.

Still, the Bond’s of the world get Poker, Nick Wild plays a game that I knew from playing it in the back seat of the school bus as Pontoon. Maybe the director feels your average Statham fan isn’t too bright, but as long as you can add up to 21 you have an insight into how this scene will pan out.

Whether he scores 20, 21, or above is irrelevant, the fact is that this is a gross mis-utilisation of assets. Get the nerds who think they are awesome for wearing sunglasses indoors and think a cowboy hat generates instant personality to pretend poker is a sport, let the action guys scoff derisively after they have comprehensively and photogenically kicked the shit out of them

Critics have been writing Statham off for half a dozen films now. It seems a safe bet to make, and eventually they’ll be right. The reality is that even though he is riding a form slump that goes all the way back to Safe a few years ago, Jason Statham knows his lane and stays within it. Wild Card doesn’t do much to break him out of the slump, but the signs are there that he still has the skills and the ability, with a couple scenes that suggest the right director and a semi-competent script will break him back into the mid-majors.

Statham will never be Arnie or peak-level-Sly, and he doesn’t get the scripts or budgets of his most obvious comparison Bruce Willis, but the sun is likely to remain shining on his action career for a few years yet. It’s up to Statham to make hay.