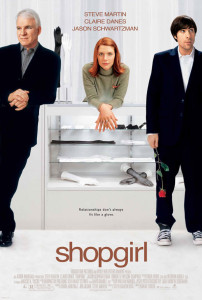 When Steve Martin writes he cannot do much wrong. It’s when he agrees to ‘light comedy’ roles that the trouble arrives.

Thankfully he wrote this.

Shopgirl is obviously a heartfelt and personal story for Martin, building an odd love triangle that you would never expect, and forcing genuinely challenging decisions without a clear right or wrong – something most rom-coms mess up. (What she ends up with the lifelong loyal friend and not the rich adulterer?)

Miribel (Clare Danes) might not have aspirations of being ‘great’, but she clearly wants more than manning a counter at a department store, even a high end department store. With no obvious talent to abet her escape, the appealing but vulnerable Miribel asks a colleague how to extricate herself from the situation. She is essentially told to give away the milk initially until this cow can demand payment.

When dishevelled Jeremy (Jason Schwartzman) arrives to clumsily sweep her off of her counter, Miribel is underwhelmed but grateful for the attention, that is, before the arrival of Ray Porter, a middle aged businessman with class and money.

Of course, no-one here makes a quick and fast decision, and nor is the choice clear cut. While Ray is nice, rich and smart, he has some flaws, certainly not as obvious as those displayed by Jeremy the half endearing, half infuriating, entirely clueless artist, but flaws.

Jeremy says whatever rushes into his head, regardless of how inane and juvenile, but he means well. Ray on the other hand knows the right things to say, and what happens when he does, but it seems quite calculated and a little pre-prepared.

It’s a rare romance that doesn’t pander to the audience, demanding they shout ‘no the other guy’ as the actress bumbles about endearingly, but Shopgirl manages to remain smart, compelling and perplexing throughout. It has no big laughs or delightful misunderstandings, just one hundred minutes of character development and intelligent cinema.

Final Rating – 7.5 / 10. Steve Martin takes time out of his busy schedule to show romantic films how it can be done.