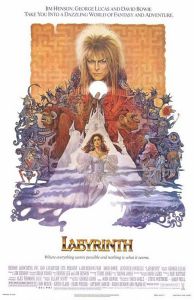 Sarah (Jennifer Connelly) is a teenage girl with a vivid imagination and a noisy younger infant brother. It is the imagination that opens a magic portal, and the momentary animosity toward looking after the infant brother that permits the Goblin King (David Bowie) entry. He of course seizes the chance to take the young child and raise it as his own in his fantasy realm.

Sarah must race against time to navigate an amazing series of obstacles and deal with an ever increasing number of fabulous characters and creatures, with a mix of the helpful and the hindering.

Meanwhile the Goblin King stands among his fuzzy populace, singing songs and anticipating her failure, but really not doing much else bar throwing minions to impede her progress, a little like Donkey Kong.

While undeniably creative, some of the puppets might be a little creepy for the littlies waiting for Fozzie and Gonzo to show up. Some of them are quite large and imposing, and in one inventive scene disembodied arms help Sarah on her way. Everything talks, even the unexpected, consider that Sarah spends the bulk of her time with a giant furry red thing, an especially large headed little person and a yappy British fox.

Labyrinth is a companion piece to The Dark Crystal, a puppet driven adventure that is a little more mature when compared with your Fraggles and Muppets. It defies description beyond being a visual marvel and an endlessly creative dark fable.

Final Rating – 7.5 / 10. I struggle to guess the exactly right age where a kid will fall in love with Labyrinth, (11-13?) but if you nail it, your kid will carry the pleasant memory for decades.