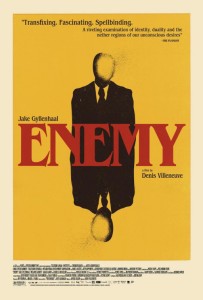 At two hours Prisoners was a hard and uncompromising watch, but that hasn’t stopped me from watching it four times so far. Enemy is almost an hour shorter, made by the same director and stars the same Jake Gylenhaal. How could I go wrong?

Adam Ball (Gylenhaal) is a daggy single college lecturer. He leads a vanilla existence, regurgitating the same lectures to yawning classes, before returning to his cheaply furnished bare lightbulb apartment for procedural sex with his pop in, pop out girlfriend – Ball does look like Jake Gylenhaal after all.

This life is unremarkable monotony, but Ball makes little attempt to change it. That is until he spies something in the background of a film, an extra who could well be his doppelganger. Rather than write it off as an amazing case of similar looks, Ball begins an almost obsessive search, and ultimately finds that the actor lives in close proximity.

What to do with this information? What may be gained by contacting this person? What is the harm if you do? How might they react to find their spitting image is calling in?

Despite parallels to The Double, Enemy is far too slow and frankly weird to find an audience – or me at least. Even a totally unexpected conclusion can’t do much to cure that, and I actually am pretty sure that I get the subtext.

Again like The Double, Enemy is at least original and stylish in its drab way. While it might represent another direction from the director of Prisoners, I would venture that this direction is a step or two backwards in terms of entertainment value.