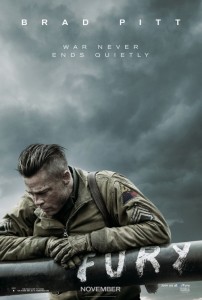 With World War 2 nearing a conclusion, the retreating German troops are becoming more desperate, slaughtering innocents who refuse to serve and doing whatever is necessary to impede the advancing enemy.

The American tank dubbed Fury is no longer at the top of its game, but it is the last of its kind, what with the remainder of the tank battalion having long since been destroyed. The machine is mechanically fragile. Its small crew similarly jittery, discombobulated and on edge.

Seeing as the film is more about what’s inside the tank than on the surface, it’s a little disappointing that a bit more of the two plus hour running time wasn’t spent on giving them a story extending beyond the glib descriptors; the hick, the religious guy, the fresh-faced rookie, the foreigner (Mexican), the Brad Pitt.

The violence is violent. The tone of the film bleak – as if it could be anything but. The acting uniformly decent, and the dancing-tank battles as proficient as the ship to ship versions in countless pirate and other seafaring films.

What is lacking though is a human touch, not for lack of trying. While the men have undoubted courage and the desperation borne of necessity, you never feel that the film is doing anything but getting to the big finale.

And speaking of the big finale, I understand that an English language film made by Americans for an American audience is always going to skew pro-USA – and I understand that at the core there is likely a true story underpinning this, but I’m pretty sure that the last twenty or so minutes sees a small group taking on perhaps hundreds, and earning a kill rate of a minimum of twenty to one. You can’t make a serious and grounded war film, then finish it with a sequence that would make Rambo blush.

With all of the brutality and seriousness required by WW2 films, Fury trundles forth with a purpose and a crew willing – nay required – to die to serve the story.