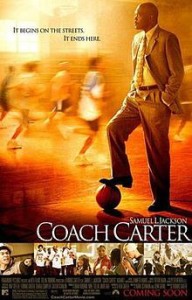 In the interest of brevity, yes, Coach Carter is the same film they drag out every couple years; talented but flawed team of unloved, unsupervised or plain old neglected underachievers and misunderstood ‘complicated types in a sometimes harsh world’, are brought together to succeed under the tutelage of one especially inspiring man.

The hook with Coach Carter is that he is the big, bald embodiment of Tough Love. As an unpaid volunteer high school basketball coach, Carter ain’t got time for that. You don’t play by his rules, you’re out.

Of course once the Coach institutes ‘Commitment Agreements’ the students attempt to rebel. Then once they accept it the parents and teachers rise up to rebel – which is actually scarier, seeing as how you would think they would be more concerned with educational percentages over than shooting percentages.

That said it still plays out in much the same way these films tend to do. Kids from the wrong side of the streets come good on and off the court. Parents and teachers learn the error of their dumbass ways. Other programs come to respect Coach Carter and his strange methods. And the kids must overcome the various temptations of evil doers to stay on the path to righteousness (which it must be said is beset on all sides by the inequities of the selfish and the tyranny of evil men). Though not too much in the way of evil doing – it’s a Disney film after all.

Strangely it is the non-sports side of Coach Carter that is most effective. Usually that is the window dressing to the breathtaking montages in the latter stages of the film, montages highlighting the athletic abilities of the born again good guys as they battle the nasty nemesis team and the clock for the trophy. While this film has a couple decent moment is feel compelled to point out that over the course of the 130 minutes not one shot by Coach Carter’s team missed.

Give me a break movie Gods. LeBron James is the best player in the world and he shoots around 55%! You can call it selective editing or movie magic, but if you want to convince me of the authenticity of your sports movie, let a kid miss a damn lay up every now and then. It’s not that hard, I do it 90% of the damn time…

Final Rating – 7 / 10. One of the rare amateur scholastic / sports combos that is more admirable and worthwhile for the educational component.