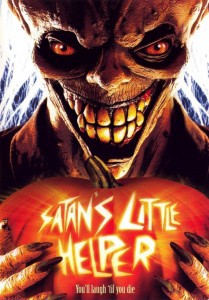 So it has come to this; it is Halloween, and a family full of absolute morons has no idea that the guy who looks like a monster isn’t wearing a mask and costume, but is in fact Satan.

Possibly understandable, it is Halloween after all and everyone is wearing costumes and acting sketchy. But you would think that when people start showing up dead and that this evil looking dude keeps popping up immediately afterwards, that questions need asking… right?

The only question I have is how this came to be made. The characters uniformly stupid, the kills lacking in originality and the appearance of authenticity, and the ‘scares’ and/or ‘jokes’ – I seriously have no clue what they are going for here – non-existent.

If Satan’s Little Helper was sincere and diligent in performing his duties, he would tell this Satan to sit back and have a really hard look at himself.

Final Rating – 2.5 / 10. The worst film I have seen in years, and the totally non-awaited companion piece to Zombie Women of Satan in terms of both tone and quality.