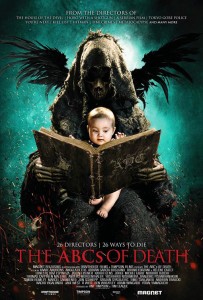 A hard film to pull off. The ABC’s of Death 2 asks 26 mostly unknown directors to make a short (2 to 6 minute) film based upon a word beginning with a letter of the alphabet allotted to them. Twenty six directors. Twenty six stories in two hours. Of course the results are patchy.

Many are dialogue free. Some are gory and graphic. Others more subtle. Some are blunt and direct, others flirt with the primary conceit of the premise. A couple use the creative conundrum that the constraints of the project parameters necessitate as fodder for their short. Three (!) have toilets as central characters in their tales…

There is claymation, cartons, slow motion and farce.

A scene focussing on a dog fight is clever and creative. A Nazi cat dealing with a British bulldog in a cabaret style show is as strange as that description suggests it will be. One story seems very reminiscent of the underrated Triangle horror film from a few years ago, and, while it seems cliched to even point out, the Japanese ones are by far the consistently weird and wilfully depraved of all.

This is the cinematic equivalent of the ‘elevator pitch’, five minutes to make an impact and be remembered. The problem is when you’re but one of 26 all taking a turn in a line, even the best pitches risk being quickly forgotten. 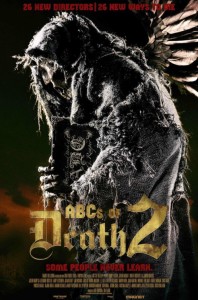 26 films across less than two hours. This film was always going to get a 6.5 ‘had its moments’…

The films are some combination of;

Not surprisingly given the demands of a compressed time frame and no doubt a near zero budget, the weirder efforts pack the most punch. Although the there is nothing unforgettable or indelible among the 26 snippets. Not even one that says “just YouTube this one.”

And yet the closing credits warn us to prep for a third edition. Perhaps the directors see this as a paid audition of sorts, but this is one time where I wished the alphabet had a few less letters.

Final Rating – 6.5 / 10. A horror gumbo that forgets that some of the primary ingredients to any effective scare are ‘build up’, ‘patience’ and ‘earning attention’. This is horror for the attention deficit crowd… (which is probably actually accurate).