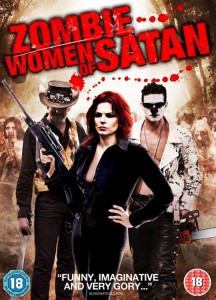 To the person responsible for the cover quote: Hang your head in shame!

The quick version goes like this: There are films that are terrible but worth a look for certain reasons, even if only one reason.

Zombie Women of Satan uses none of these devices in a way that deserves any credit whatsoever. In fact it uses the Troma hook as its only lure – having a title that practically demands attention even if you know it will be bad.

Only as I just mentioned Zombie Women of Satan is not good-horrible, just horrible horrible.

I am not going to waste my time and yours discussing the various flaws and faults of this film, suffice to say it sucks balls from first minute to last. There wasn’t one moment that was even “no-one will believe this” or “Gee that was crazy”. Even the nudity was lamentable with fat chicks in granny pants covered in fake blood.

I thought Doghouse was a lazy manipulative barrel scraper of a film.

I refuse to watch The Human Centipede because it is simply a transparent attempt at attention because of the gross out factor, the director even tells everyone the entire plot he is so desperate to be acknowledged for his so-called edginess.

I hated this film for how lazy it was. I watched it a few days ago and can’t remember anything without looking at notes. In another week all I will remember is how much I hated this film, that might be the only thing I take away from the experience.

If I reach one person and stop them from watching this steaming turd I have added value to society, if only briefly. This is the worst movie I have watched in 2 years, probably longer.

Final Rating – 0.5 / 10. Even the most cold and calculated attempt at finding notoriety through exploitation and violence should only be attempted by someone who can use a basic calculator. This is so inept that I wouldn’t have been surprised if there was a single eye onscreen for the duration of the film. The 0.5 score is because the cameraman pointed the camera in the right direction, the loss of the other 9.5 points is because by doing so I had to watch what happened.