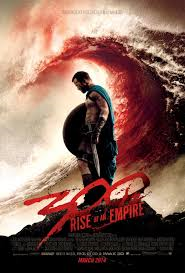 The blood of the 300 noble Spartans is yet to congeal upon their motionless and hairless pecs as 300: Rise of an Empire opens. A film that is neither a true prequel nor a sequel, somehow taking place before, during and after the events of its predecessor.

And if that sounds off rest assured the confusion doesn’t end there. For while you might wonder intermittently how self professed God King – the no doubt laid back and humble – Persian leader Xerxes can be seemingly everywhere at once, or how rival leaders can exchange meaningful glances they purvey such emotion across blood spattered battlefields as blood gushes and limbs flail.

But this is not a history lesson and it is most certainly not a masterclass in logic. It is a film that promises only blades, blood and boobs – and it delivers in every category.

Here is a film where the destination of one arrow amid thousands is known to all well before it even leaves the bow, where the surprise tactic in a pitched naval battle raging far offshore arrives on horseback, where a hilariously intense frenzied sexual negotiation breaks down abruptly (leaving both parties unsatisfied in every way).

All in slo-mo of course.

And yet my obvious cynicism is a lie. For while in my heart of hearts I left ‘301’ shaking my head at the inanity of it all, I was grinning at the same time, knowing full well I will watch this again shortly after it arrives on DVD.

Where the first film found our heavily outnumbered heroes staving off wave after wave of invading Persian hordes, most of the battles in Rise of an Empire are pitched upon more literal waves. You could be forgiven for not realising that the combatants are afloat, as regardless of the ferocity of the waters or the strength of the howling gales, nary a hair moves, let alone a sandal in search of surer footing.

With Leonidis and the Spartans elsewhere engaged with Xerxes and his land forces (they pop up only very sparingly), this film focuses more on the Athenian navies as they seek to take on Artimisia (Eva Green), Xerxes right hand woman, and her many vessels all jam packed with heavily armed warriors. (We know they are the bad guys because they whip their oarsmen mercilessly.)

It might sound odd, but it is the ships themselves that serve as the weapons, with constant ramming and charging. And while this might sound a dangerous and high risk tactic even for the victors, given that every second speech (and there are many) ends with people urging each other to die in battle, this is probably inevitable.

The leader of the Athenians is Thermistokles, a master tactician charged with directing the rag tag bunch of poets, farmers and tradesmen who serve as Athens’ water bound defenders – poets and farmers who I might add all possess rock hard six-pack abs and perfect hair…

The battles are especially fierce. This is certainly no PG13 romp. The blood spreads quickly and liberally, and the bosoms of both genders stand pert and proud beneath beautiful faces, all with a tendency to spout bluster and nonsense. In keeping with the determination to avoid logic a ship can be reversed upon a barked order, and two boats can converge upon one enemy ship in lock step, despite no one appearing to be tasked with steering either ship.

But as your eyes roll incessantly you may find yourself grinning despite yourself.

Regardless of how many battles and the incredible body count on both sides, there always appears to be the same number of Athenians left. And it is the race of poets and farmers that is the problem. While Thermistokles may be a master tactician, he lacks as an orator and a possessor of a powerful presence. This man is no Leonidis. It isn’t helped that he is saddled with some of the crappier motivational speeches in the film. It helps less that he is entirely overwhelmed by Artimisia, as Eva Green is the only actor in the film to rise to the required level of insanity that the material demands, revelling in every ridiculous line and steadfastly maintaining the same smouldering glare of contempt and unbridled hatred.

This might be Thermistokles’ story, but it is Artimisia’s film. If she were one of the 300 Spartans, the Persians would never have breached the Hot Gates.

I remain perplexed by this film, torn between the guilty exhilaration of some of the fight scenes and the painful tedium of the all too many speeches (Seriously “The stink of destiny”?). Sportsmen tend to ‘tune out’ constant berating and belittlement, and on more than a few occasions here I grew tired of every new tired rev up.

But the good somehow outweighs the bad. I can’t pretend to recommend this patently commercial cash-in on its cinematic merits, but as a guilty testosterone fuelled hack n slash romp this evicerates all the boxes.

Final Rating – 7 / 10. Prep for ‘302, the Bloodening’ because once this ticks over 100m box office you know it’s coming. And that might not necessarily be a bad thing…