Was Craven was rightfully crowned as one of the masters of modern horror. So when he returned to reinvent the slightly jaded slasher horror genre, it was seen as a resurrection project. Audiences lined up the world over to see hollywood’s youngest and brightest take kitchen knives to the chest, with still more actors and actresses raising their hands to be ‘next’.

There have been three sequels so far across two decades which raises the question; when does pointing out genre cliches itself become a cliché? 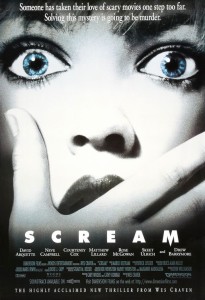 A double murder of two teenagers rocks a small town, which dealt with a similarly heinous crime only one year prior. The high school students show the appropriate levels of shock and off colour humour – how we should envy the wisdom of youth, and the police force and authority figures are on high alert.

Vulnerable, virginal Sydney (Neve Campbell) is especially on edge. It was her mother who was brutally murdered less than twelve months ago, and with the return of the press and the dredging up of old questions and theories, she wonders whether the murders might be related.

The film sensibly peppers the cast with ‘types’. The sensitive pretty boy, the obnoxious douche, the slutty friend, various nerds, jocks and dweebs, all with just enough screen time to justify them as a potential suspect. Scream, like so many other slashers, is about two things, the kills and the unveiling. The kills here are for the most part uninspired, at least after the first sequence which bravely killed off perhaps the biggest ‘name’ in the film (at the time) in a lengthy, suspenseful build up. The unveiling too is hardly revelatory or astonishing, but serves the film well enough, and in truth it wouldn’t matter who was unveiled, the reaction couldn’t have been more than “oh, that one”. As the subsequent films clearly show.

What put Scream in the spotlight was the self referential nature of some of the dialogue. In one sequence at a party the revellers painstakingly list the horror movie ‘don’ts’, while characters in other rooms do their best to break the rules and tempt fate in the process.

As a self aware genre examination, Scream was especially timely. As a slasher movie it is perfectly adequate teen friendly fare, with familiar faces for the easily pleased. I can’t say that I liked it, but there are worse ways to kill a couple hours.

Final Rating – 7 / 10. As history will show, the opening sequence is the highlight of the entire franchise. 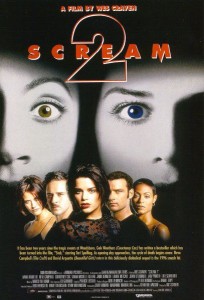 Scream continues to clumsily belabour the point that this is all so far beyond meta that we must enjoy it, while settling for all of the very cliches it derides.

“Sequels suck!” says one of the interchangeable young stars. Well if he says it then this couldn’t suck could it? I mean that would be disingenuous to state if not true.

Well isn’t this all needlessly circular and inevitable?

With the events of the Woodboro murders already made into a shlocky slasher franchise called Stab, Sydney, now in college, finds herself back in the unwanted spotlight.

Dewey is still bumbling around in his good naturedly got less way, ‘aw shucks-ing’ at Gail, who of course wrote the best selling book of the original events.

Characters exchange looks that linger a beat too long. They enter and depart scenes at convenient moments. They are called away and called in, often puffing and panting just mere moments after the Scream guy made an appearance, sometimes with easily explainable blood or alibis. It’s so obvious that it must be them, and by that rationale equally obvious that it must not be them.

With a bigger budget and a sure fire box office draw, far more of eager young Hollywood line up as vaguely recognisable and willing grist for the mill, happy to feign astonishment and terror as the new guy/gal in the hood and mask rocks up in pursuit, proving a) it’s hard to run in a cloak b) depth perception is limited with a big goofy mask and c) a gun is far less effective than a gun…

…oh and I forgot d) it doesn’t matter who is under the mask. It just doesn’t. 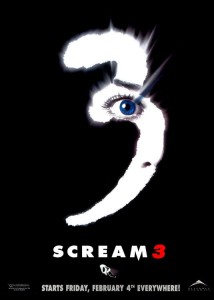 Dewey is on set as the special consultant. Gail rocks up to lament the hackneyed acting of the young scrag tabbed to play her onscreen. Irony alert for Ms Cox.

And Sydney is as always not interested in all of this, hiding far away from anything related to Woodboro, but she is inevitably dragged in to the midst by the end. By now know this is more inconvenient than terrifying. In fact she appears jaded by this, as if the new murders are as surprising and unsettling as having to go to a family barbecue when you really would rather do something else.

Scream guy remains consistently inconsistent. Despite being several people over the course of several films, he/she botches many simple kills with wild knife swings and stumbles. Let’s just say if someone really, really, REALLY wanted Sydney dead, it would have happened by now. But while Sydney still stands, Hollywood’s most unblemished and aspirational queue up to take a knife to the gut, hoping against hope that this will be the moment that LEDs to their discovery.

The kills go according to the script, which is by now so obvious that I am not sure if it is obvious any more. This Scream guy has a voice replicating machine, which is a neat trick to have, albeit extremely unlikely.

The ideas have long since left this franchise. This is a tired game of duck-duck-goose, with Sydney wandering around tagging duck after duck for the slaughter before some goose drags off the cloak at the end, provoking a response which by now is ‘oh, that one’ and flicking the channel.

Final Rating – 5 / 10. Two key questions to consider six hours in; was the key moment in the series still Drew Barrymore’s scene? And wasn’t that like the first sequence in the franchise? 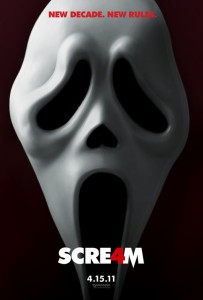 For those who have watched the series to this point and consider themselves fans; can you name all the killers to date? If you can, well done, and get a life.

Scream planning meetings must start with a Wheel of Fortune with all character names on it. It could sell twenty three versions of the film, each with a different killer. They only have to shoot the last scene twenty two more times, and it would make just as much/little sense as the one they end up with.

It seems even a decade on the Mask still hasn’t bothered with cardio or agility training. He/she (I’ve already forgotten which) still trips, flails and falls. It’s strange that the rise of handguns in the U.S. hasn’t reached Woodsboro, but in the current climate over there that probably wouldn’t be wise either. There are enough teens and disenfranchised opening up randomly and without reason already.

They still arrive and leave conveniently. They still hold a look a second longer. Sidney, Dewey and Gail are still here. There are a million noobs to suspect and lament the loss of, and a very small number of these (as few as one) will end up unmasked. They still say witty things like ‘slasher movies are so done’. In fact, the only new element is the arrival of Internet live blogs, where young idiots blather on incessantly about nothing in particular, and apparently other idiots sit transfixed to the monitor.

Who actually does watch these streaming idiots?

But all this *ahem* ‘masks’ another more important issue; why does this film even exist? Let’s examine…

Final Rating – 5.5 / 10. Slashers are indeed done, at least for now, and the Scream franchise killed them, tripping over itself all the way…

Why did Scream 4 come about?

Neve Campbell: Biggest box office since 2000 – The Company 2.2M. Yep I’d never heard of it either.

Now, with Wes Craven passing, what chance do they or the franchise have…?