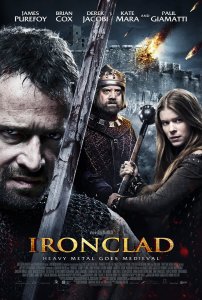 The year 1215 was a significant one. It represented the supposed conclusion to an era of gross mismanagement under the rule of one King John (Paul Giamatti), with the culmination being the signing of a peace treaty known as the Magna Carta.

This was meant to be the dawn of a new more reasonable era of society – and indeed it started that way – but once a prick always a prick, and with little warning King John amassed an army with which to retake key regions from whence to once again subjugate the masses.

With many well armed (and awkwardly wigged) men behind him and not too much of note ahead of him, it seemed an inevitability that England would face dark times. That is until a small group of square jawed, steely eyed Knights Templar under the watchful eye of Baron William Albany (Brian Cox) decide to man the walls of the lone castle that might represent a stumbling block on the road to tyranny. And when I say small group, I mean under twenty, facing an army in the thousands.

While the numbers might be thin the gravitas readings are off the charts. Among these fine and noble men are Jason Flemyng, MacKenzie Crook and the C Grade Christian Bale, the one and only James Purefoy. (For the record Karl Urban has B sewn up for now.)

These few. These brave. These faceless; perch atop the walls and await the advancing army, stern of brow and steady of knee. Using arrows, oil, rocks and of course steel, they ward off the initial assault and set in for a siege.

Rooney Mara hangs about teasing her hair and sending her cleavage out on patrol, demanding that the Knights all second guess their vows of celibacy and acting shocked when her ferocious breast-web snares an unsuspecting fly.

Giamatti gets the thankless Alan Rickman role; he gets to chew the scenery and seethe on the periphery, but not much beyond that – although his spittle inflected Big Screaming Rant is quite laudable as these things go.

The action arrived in short bursts, and when it does it is a frenzy of shaky cam, punctuated by shocking moments of extreme ye olde violence. Legs are severed and heads are rent in twain. Not a backwards step is taken and nary a moment of levity admitted.

It’s a dour and joyless affair, full of despair and loss, leading you to think ‘well done but why?’.

Final Rating – 6.5 / 10. An exercise in perfectly adequate competence, wrapped in a product that no-one need buy. 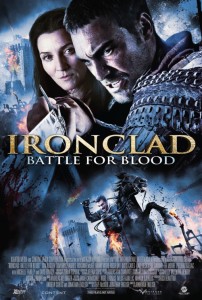 Ironclad was a reasonable film but I struggled to find valid reasons for to exist. This clearly separates itself from Ironclad 2, because here is a film where the reasons for it not to exist are many and varied.

All of the flimsy strengths of Ironclad 1 are definitive weaknesses in the sequel, but they don’t stop there, and there are a dozen new flaws and bad ideas introduced to further enrage you.

It is five years after the events of the first film. England is at peace. Everything is awesome. But meanwhile in stinky old Scotland, there are those who would spoil the serenity advancing towards the now snoozy English countryside.

Only a small group in one key location can stop them. Sound familiar?

What ensues are a series of pale imitations of the frenzied wall battles from the first film, featuring new attackers coated in ‘we saw Braveheart too’ makeup. The entire film plays up to the ‘it was a violent time’ justification for clumsy bloodshed, only the shakey camera is even more pronounced this time around, and the special effects wouldn’t have been out of place in the feudal times in which this film is set.

One by one the faceless nobodies you didn’t care about will die, and you will feel nothing.

Despite trying every trick in the book to make this more meaningful and less obviously ‘direct to dvd’, nothing works. This is boring at best and amateur stuff at worst, and too often we see the worst.

Ironclad 2 is a moribund effort that continues on without a pulse for one hundred minutes, but despite this it refuses to die.

Ugh. That was painful. Let’s just move past this can we?