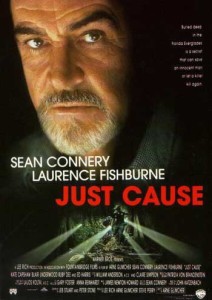 (Everyone aside from Bond not pictured.)

And this is a reasonable one.

When Bobby Earl (Blair Underwood) is unceremoniously lumped on Florida’s death row for the killing of an 11 year old girl, no one bats an eyelid. Well maybe his grandma puts up a bit of a fight… But for everyone else it is just another poor young black man off the rails.

But grandma ain’t giving this one up. She seeks the assistance of long retired lawyer Paul Armstrong (Sean Connery) whose warm Scottish brogue apparently brings instant credibility and the understanding only an outsider can provide.

Paul meets with local cops, one black, one White, both seemingly racist. They drink moonshine from jam jars, look Paul in the eye and tell him to back off. That the right man is awaiting his fate. That the boy just plumb done did it.

Then Paul meets Bobby Earl himself and finds him a young, well educated and charming young man indeed. Another meeting with a far seedier inmate (played by Ed Harris in a nice, nasty little role), and Paul is convinced that it would be an injustice if he allows things to proceed.

As with all of these Estherhaus inspired thrillers the path to the truth is never a straight line. Before anyone can be proven right, many must first be proven wrong. Just Cause might take a while to get moving, and once it does it moves a little fast for its own good near the end, but it has enough dramatic moments to keep you interested, enough twists to keep you surprised, and in between a scene stealing work of bravado by Ed Harris to liven up the other parts.

There were a bazillion of these films in the 90s. Many of them were so samey that they simply faded from memory. This one is about middle of the road, but it has enough pluses to make it worth a look.

Final Rating – 7 / 10. Watch it for the (better than expected) twists. Watch it for Larry Fishburne sipping from a jam jar while looking down his nose at Sean Connery. Watch it for Ed Harris going all Manson on you. Watch it Just Cause…