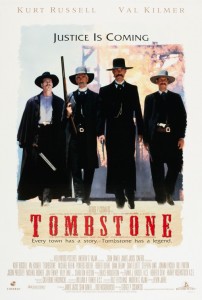 Nobody pisses off the Amish.

At its core Tombstone is pretty much a tale of a doomed romance between two mismatched individuals who – despite being very much in mutual admiration – are just too different to co-exist. The fact that these two are macho wild west lawmen is irrelevant.

Tombstone takes place in a reimagined and surprisingly dust-free wild west, when a large group of likeminded naughty types coin the idea of strength in numbers. They form an alliance, the world’s first organized crime syndicate, and dub themselves ‘the cowboys’. I’m already thinking that none of the group majored in marketing.

The Cowboys commence operating across a wide band of the old west, nearing the small ominously named town of Tombstone at practically the same time as some other new arrivals in the brothers Earp. The most well known in a historical sense is Wyatt Earp, famed lawman of the old west, though as we meet him here newly retired and determined to stay a law abiding but neutral citizen, and not a quick drawing peace keeper. So long as nothing affects him, Wyatt is content to stay out of it.

Of course in a town like Tombstone, where they shoot first… and second… and leave the questions for the wusses, it’s never a long wait between gunfights and conflict. And that’s before even The Cowboys show up.

But no, Wyatt is going straight, and he tells this cold fact to both sides of the law. Often.

It doesn’t help matters that within minutes of setting foot in Tombstone, he runs into Holliday (Val Kilmer), an old running mate and ally, but a man prone to sudden violence on account of a fairly nasty combination of substance abuse and highly inflated ego. Hanging with Doc is never dull, but like tiptoeing a razor blade it almost always ends in bloodshed.

Nonetheless everyone settles in to a nice rut. The Cowboys start their nefarious business on the periphery of the town. The lawmen of Tombstone try futilely to keep them at bay. And the Earp brothers keep to themselves at all times, even with an entire town on edge and seemingly just biding their time before the tipping point.

Of course this isn’t Wyatt and Earp’s version of the Bucket List, nor is it ‘Wyatt and Earp remain peacefully on the sidelines as all hell breaks out’. Inevitably those pesky lazily named Cowboys encroach just a little too near Wyatt’s fabulous mustache (this is THE film for mustache aficionados) and believe me when I say the six guns are drawn.

Poor old Kurt Russell seems to take the ‘going straight’ thing very seriously. His Wyatt Earp is frankly quite the snooze, relying on tales of his past deeds and our own anticipation of when he might once more grow a pair and take a side. Val Kilmer is given more latitude, and his performance is either awesome or awful. Like some of the middling Al Pacino films you can’t work out if he is trying way too hard, or if the film around him isn’t trying enough.

Like the gang’s name the leader of the Cowboys is also mediocre. A barely memorable bad guy, who hardly seems worth summoning the energy to wish harm upon. Michael Beihn sneers his way to prominence in the scenes in which he appears, but that isn’t often enough. Similarly Bill Paxton and Sam Shepherd stand about in Wyatt’s shadow, mustaches bristling as they all wait for something worth doing.

Unfortunately before our latent bloodlust is slaked, we get 90 minutes of little more than Wyatt and Doc indulging in heart to heart convos interspersed with Wyatt pausing to tell the latest passer-by that he is going straight. And don’t get me started on Wyatt’s romantic dalliance with Dana Delaney which seems tacked on, as if to distract us from the crackling sexual tension between Wyatt and Doc, where a well placed saxophone solo would surely have them jangling each other’s spurs in an instant.

But I didn’t come here for Brokeback Tombstone, and while I don’t demand instant gratification and wall to wall gunfights, when the bromance trumps the romance, and the skirmishes feel like stalling, I kind of start to wonder if a film about Wyatt Earp’s years before he retired might have been more interesting.