Another bunch of films that either miss the mark, or the mark is set way too low. 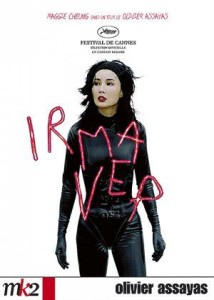 When you hear about a French arthouse movie starring an Asian actress as a vinyl clad vampire (hint: Irma Vep is an anagram), your mind immediately conjures up a few expectations. Credit the film that aside from a few minutes this film ignores them all. To the film’s detriment though in the absence of quirkiness, kookiness and general strangeness, all that remains is pretentiousness, a talky film that goes practically nowhere.

On-ly Ir-ma grabs the eye
All else bland & stale
Last five mins nuts. Too late though

After an eternity of yak-yak across a couple languages, we finally get reward for patience, with the last five minutes finally giving evidence that the filmmaker was doing something in between dreary existential hum-drum. This crazy sequence plays out like outtakes from the portentous VHS in The Ring, but it is wayyy too little, wayyy too late.

Jackie Chan’s frequent 80s damsel in distress Maggie Cheung seems an odd choice as the star, given she is the Chinese star of a French film that can only converse with people who speak English. But she is a refreshing and engaging presence amid a cast of snooty and/or forgettable French men and women, all of whom it seems want to bonk her.

Unfortunately the film is played with so little innovation and passion that it ultimately straightens out what should have been the bendy oddball bits. And when you have a film that should be pretentious and weird (Holy Motors being a prime example), and then you take out the weird… 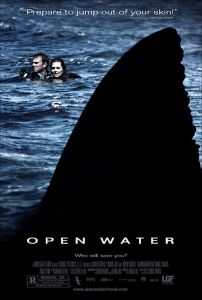 Open Water was made for about the same budget as a child’s birthday party, only with cheaper cameras. It doesn’t pretend to be a ‘found footage’ film to justify the cheap look. It doesn’t try to even go outside the material that inspired it, in fact it stays so well within the bounds of its forebears that it brings not one new moment to the table.

The least I can say about Open Water is that it’s a heavily padded 80 minutes that does exactly what it sets out to do any NOTHING else. The most I can say is that it does some things well and nothing horrendously.

Look when you say the words ‘shark flick’ there are only two possible endings, and usually only one winner. Open Water eschews the killer shark angle, it obviously didn’t have the budget for hijinks and action sequences, just bobbing about killing time.

That might provide credibility points for the film, and there are a few suspenseful moments as they float along, but after five minutes or so it becomes as compelling as watching someone idling away in frustration as they wait for a car park to open up. You want them to succeed but you could happily go the rest of your life not knowing the outcome with no regrets.

Final Rating – 6 / 10. If you want to watch a film in which people may or may not be eaten by sharks, then here’s another one. 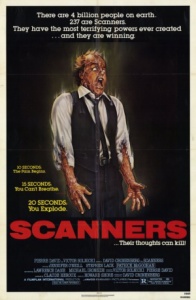 About a billion people are familiar with at least one moment in Scanners. Only most of them don’t even know it, like when my wife nods along to a song in an ad and I rush to inform her of the artist, the album and why it is so very cool. She never cares.

That’s the same reason why those 99.7% of one billion will never seek out Scanners – because beyond the exploding head there really isn’t much to grab the attention of fickle Gen Y (and yes, most of Gen X).

This could make heads spin. Or ‘splode
At least a head-ache
But on-ly two scenes stand up now

Most notable to me for being the first time I saw Michael Ironside and his gritted teeth, Scanners starts and finishes with a bang, but that leaves about 90 minutes of filler, most of which is full of bland characters and confused looks.

The psychic battles might have sounded good in the early 80s, but now they look like hack actors grimacing, shaking and jiggling their cheeks. this is like The Village of the Damned without the albino kids, and it’s only marginally better by comparison because that film sucked donkey.

For an 80s film Scanners isn’t as bad as some. It is pretty well made and actually has a plot beyond a beginning and an end. But if not for the boom-boom head and the ‘brains at 15 paces’ finale, this would be largely forgotten.