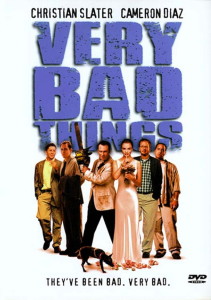 Boy bands get kookier all the time.

We get to spend several (edited down) hours with the five gents on the poster before they get to the Very Bad Things. More than enough time to ascertain that these guys are Not Very Pleasant People.

Worse still when you realise that while the groom to be is marrying someone shaped like Cameron Diaz, she has the personality of a particularly angry Jennifer Lopez.

After the singular event that triggers things takes place in the drug and booze soaked Vegas hotel room, the unlikable guys get more unlikable. The even vaguely likable become themselves unlikable. And Cameron Diaz-Lopez gets worse and worse and worse…

Like a slasher film where reprehensible teens are slaughtered one by one, I find it hard to summon any empathy when the perpetrators and victims of the acts are so very annoying in the first place. Harder still when the supposedly comedic moments continually fall flat.

Vile I can handle, and some of the acts here are vile. I can’t stomach uninteresting and unfunny. And Cameron Diaz plays a bitch so effortlessly and effectively that I can’t help but wonder if the carefree and laid back public persona is the ‘act’.

There is blood. There are deaths. What there is none of is levity and laughs – black or otherwise. Strange given that the film clearly markets itself as a black comedy – only in reality it is merely a continued spiral towards a depressing ending.

Final Rating – 5.5 / 10. How could so many Very Bad Things create so much blandness?