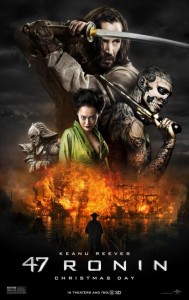 In Japanese history a ‘ronin’ is a samurai warrior whose master has either disowned him or died. Failure to protect ones master is bad, so a ronin is something of a displaced individual, roaming aimlessly in perpetuity, alternately looking for freelance mercenary work or simply wallowing in disgrace and self loathing.

A few months ago the trailer made it look like a cheesy relative of Priest and Keanu Reeves’ own Constantine, both would have been a significant upgrade on reality.

In this ancient Japan full of fantastic beasts, magical beings and stone faced warriors, Kai (Reeves) is an out of place blow-in; a white kid taken in and raised by a noble Japanese family, much to the chagrin and disdain of the community of Ako.

Pre-teen Kai finds companionship with a young girl. He grows up an accomplished servant and still most definitely an outsider (he is derisively called ‘half-breed’ throughout the film). She grows up a Princess. Such is the chasm between the social standings that they are forbidden from consorting, despite the fact that the Princess so clearly gags for him…

Peaceful Ako is thrown into disarray when a witch’s trickery brings great dishonour – Oh the Dishonour! – and the land’s are passed to a decidedly dodgy looking chap, along with apparently the right to marry the Princess after she serves the mandatory 12 months of mourning brought about by her Father’s ritual suicide.

With no leader to guide them, the former samurai of the region are cast out. There are 46 of them in all. Why not 47? Well because Kai is of course a mere half-breed, and could never possibly be even a former samurai. This nearly four dozen spend their time stewing in the forest, kicking sod about and whining about what might have been (‘Well if you had’ve protected your master from the saucy witch-wolf you wouldn’t be in this situation.’)

Everyone is dour, emotionless and bland. The action moves as quickly as treacle down a cardboard box, with all the ridiculous looking silly stuff consigned to the very end, long after we stopped caring. It very much looks like the filmmakers thought for some time that they were making a serious, Lord of the Rings style epic, then threw in some cheap CGI at the end once they realised just how badly they failed.

The film isn’t helped by its steadfast adherence to PG rules. No-one in ancient Japan bleeds; unless they are signing a blood oath. I couldn’t tell you the body count in this film. It could have been 5. It could have been 105. I think they used swords a lot, but what’s the point of having a sword without the satisfying arterial gush of a severed limb?

Say what you like about 300: Rise of an Empire, but you finish that film knowing that those guys used swords. A lot.

Instead it exists in disgrace, an aimless effort that no-one should claim, doomed to wander the bargain DVD racks in perpetuity, underwhelming the unfortunate and less discerning viewer, $2 at a time…