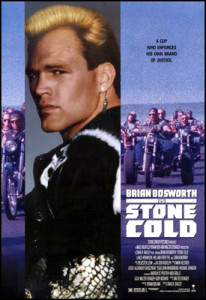 Vanilla Ice… without the talent.

Stone Cold is an obvious attempt to create an action hero in ex NFL player Brian Bosworth. A well muscled man with a square jaw, negligible personality and the mammoth ego that only the truly delusional among us have.

The problem is that while the NFL is incredibly well supported in the US, outside the continental United States it is just another niche sport, not even receiving the international awareness of the NBA.

Without valuable international sales – the sales that have kept JCVD in the game for three decades of declining quality – Bosworth was destined to remain a one hit wonder, another well mulletted muttonhead consigned to awkward history.

And as a mindless generic early 90s MA action flick Stone Cold is actually serviceable. Bosworth appears as Joe Hoff, a cocksure undercover cop on suspension – no doubt for flouting the rulebook and getting results – convinced to infiltrate an especially dangerous biker gang with a tendency to kill authority figures and those silly enough to stand in their way.

Now what the film goes out of its way to tell us is that bikers be crazy. They shoot at each other in the name of fun and bust out laughing. They are surrounded by empty beer cans and full fridges, and empty headed bimbos with full racks.

This particular gang is called the Brotherhood. The leader is Chains (Lance Henrickson) and his quick tempered muscle is Ice (William Forsythe). It takes Joe – now John Stone – all of a lunch break to sit face to face with Chains, who is neighbourly enough to offer the services of his girlfriend as a welcome gift. A few minutes later and he’s brokering deals to the Brotherhood on the condition that he be the middleman.

The usual stuff ensues. Stone must toe the fine line between appearing a genuine crim and perpetrating actual crimes, he must endear himself to Chains without enraging Ice or raising the suspicions of the girlfriend. All while keeping his blond on top mullet immaculately feathered at all times.

Bosworth proves to be just like the poster suggests, an overconfident doofus out of his depth. Henrickson and Forsythe are menacing enough in their thankless supporting roles, keeping a straight face even as the film veers hilariously over the top near the end.

Bosworth may cop flack for this film from his buddies, but while this was never likely to be his breakout hit, it isn’t the embarrassment that it could have been. Instead, Stone Cold will remain as the one movie poster in his games room alongside the however many football trophies.

Final Rating – 7 / 10. There were a million of these films in the 80s and 90s. So let me just say as far as mono-syllabic shirtless meathead movies go… Here is another one.