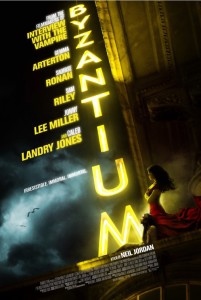 Their story spans centuries. United by blood and driven by their reliance on it. Clara (Gemma Arterton) and Eleanor (Saoirse Ronan) are inseparable but poles apart.

Eleanor is quiet and insecure. She writes poetry and elaborate stories, but picks off the weak, misguided and those silly enough to befriend her.

They are not vampires, though they share some traits, must obey some of the rules that apply to same, and, as we find in flashbacks that pepper the film, share some of the same bloodlines. I guess if you go back far enough most people have surprising ancestors. The strange thing is while Clara and Eleanor had links to those from two centuries past, they are old enough to have met them. Imagine being an awkward teenager for two hundred years!

The movie proper starts when they find accommodations in the Byzantium, a defunct run down guesthouse owned by mousy and needy pushover Noel. Clara promptly claims the building and sees potential for it to become a whorehouse. Give a hottie lemons…

It’s no wonder then that Eleanor ventures outside to remove herself from the debauchery. She meets Frank in a restaurant. He too is awkward and insecure. And ugly.

Byzantium is like a mountain bike on rollers. It always seems pointed somewhere and occasionally exerts great effort and energy in going there, all the while without really moving. The Eleanor / Frank subplot wants to drive the film, only neither character is strong enough to summon any interest, and focusing on Clara and her tight outfits and heaving corsets would seem limited and missing the point.

But that’s exactly the fate I ended up accepting. A two hour film in which the so called ‘action’ sequences are over 90 minutes apart struggles to maintain interest otherwise.  It has a determination to embrace what made Let the Right One In so captivating, without ever quite hitting the mark. The action sequences in that film were shocking for their abruptness and great violence, here you just want them to get there and get it over and done with.

Byzantium is occasionally interesting, sporadically engrossing and always nice to look at, but nothing to get worked up about.