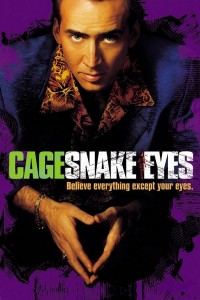 It is the night of the big fight, a heavyweight match between the champ and the contender. Everyone who is everyone is at the big fight.

Rick Santoro (Nicolas Cage) is there ringside. Santoro is a cop. A local identity in the area who rules his patch with a mix of bluster, noise and crooked behaviour. Santoro seems incapable of sincerity, silence and common sense. If he were at a party he would be the most obnoxious guy there, yapping his way inanely out of every conversation and finding only shoulders pointed in his direction.

At fight night there are thousands milling about and the venue is abuzz with activity and promise, with Santoro zipping about spreading his unlikability liberally and evenly. It seems while everyone knows him, only head of security Kevin Dunn (Gary Sinise), has time for Santoro. In fact he is the one who gave him the plum tickets.

So when the champ goes down in the first round, just as a VIP is shot only inches away from Santoro, the energy in the arena stays high, but in a different way. Panicky people spread in all directions for the exits, only to find that they are all locked from the outside as the sporting event has now turned into a crime scene.

Being crooked doesn’t necessarily make Santoro a terrible cop. In the frenzy of movement he notices certain individuals that grab his attention. The mysterious blonde. The redhead. The champ calmly looking at him while he is ‘knocked out’.

Santoro lets his instincts take over, and in almost real time he follows up on clues to get to the truth.

Snake Eyes finds Nicolas Cage at the onset of the ‘crazy’ period, which I should point out has not yet ended. His Santoro is annoying as hell and twice as loud. The plot twists and turns in many directions, with more than a few subplots to clear up along the way and a couple red herrings thrown in for good measure.

There are a couple clever moments where flashback stories dovetail into moments that we witnessed earlier, but from a different angle, but the film is hardly gripping and for the most part is neither great nor terrible.

The sad truth is that if Nicolas Cage appeared in this film today it would be hailed as a comeback, such is the drivel that he has been appearing in for the last decade.

Final Rating – 6 / 10. Snake Eyes is not a bust nor a flush. It is merely a decent whodunit with a couple clever moments.

While I try to throw a joke or two into proceedings when I can all of the opinions presented in my reviews are genuine. I don't expect that all will agree with my thoughts at all times nor would it be any fun if you did, so don't be shy in telling me where you think I went wrong... and hopefully if you think I got it right for once. Don't be shy, half the fun is in the conversation after the movie.
View all posts by OGR →
This entry was posted in Film, Movie Reviews, Nic / Nicolas Cage, Superstars, The Grey Area. Bookmark the permalink.