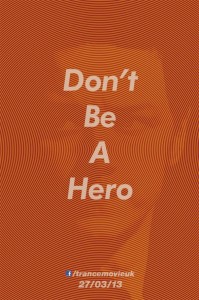 As Trance casually informs us in the preamble, pulling off a major art theft was better in the olden days. Easier at least. And more profitable.

But that doesn’t stop those with fiendish intent and devious minds from conspiring. And on this occasion an especially expensive work is taken from under the very noses of the auction house tasked with selling the thing.

As tends to happen with these scenarios, the bad guys are aided and abetted by people on the inside; a hardened and experienced type in Frank (Vincent Cassell at his unpredictable and menacing best), and auctioneer Simon (James McAvoy), a loyal employee turned accomplice.

What doesn’t aid the situation is a blow to the head, administered by Frank to Simon in the interest of adding authenticity, which culminates in the full blown and very real case of amnesia that Simon suffers. With Simon being the only one who knew where the purloined portrait was stashed, this is an especially unwelcome turn of events – especially for Simon who finds Frank and his cronies far less amiable and accommodating once they realise that the location of their ‘ill-gotten’ gains is now ‘for-gotten’.

Hypnotherapy is suggested out of desperation. The first psychiatrist consulted is Dr Elizabeth Lamb (Rosario Dawson). Elizabeth confirms to Simon that if the information was once in his head, it should still be there somewhere. It may just be a matter of finding the right ‘key’ to unlock it.

This is welcome news to Simon and Frank alike, but unfortunately this Lamb is no dumb bunny. Elizabeth works out that Simon is asking questions under duress, and demands to be told why. Surprisingly instead of threatening to dob the group in, Elizabeth agrees to assist… for a large cut.

Apparently being a psychiatrist is not as lucrative as I always imagined.

Frank and his crew increase the pressure on Simon to spill the beans. Simon similarly just wants the confusing mass of information in his head, muddled by Elizabeth’s kind assistance and shapely form, out – and his involvement out with it. And for her part Elizabeth seems to be working all parties equally – using far more than just the powers of her mind – while waiting to see where the chips fall.

Trance is all a bit confusing at times, perplexing at others, and reliant on the kind of memory related preposterousness required to drive the action. It is hardly Memento 2, but it is also a long way from the lazy crap that this genre quite often trots out.

McAvoy and Cassell are both adequate as the duelling protagonists, but it is Dawson who steals the show as the conniving and opportunistic Doctor who seems to have mislaid the Hippopotamus oath temporarily. She also has a memorable, though slightly… OK very… gratuitous sans clothes moment that will likely become her career Basic Instinct freezeframe moment, enjoyed by wannabe cinema intellectuals the world over.

Final Rating – 7.5 / 10. Trance is never dull, often clever, and has enough twists and turns to reward the viewer. You could do a lot worse.

While I try to throw a joke or two into proceedings when I can all of the opinions presented in my reviews are genuine. I don't expect that all will agree with my thoughts at all times nor would it be any fun if you did, so don't be shy in telling me where you think I went wrong... and hopefully if you think I got it right for once. Don't be shy, half the fun is in the conversation after the movie.
View all posts by OGR →
This entry was posted in Film, Movie Reviews. Bookmark the permalink.