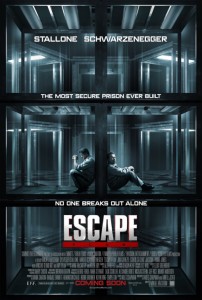 There’s the old joke about bad films that goes ‘this film wasn’t released. It escaped.’ In the case of Escape Plan, the crime of this film isn’t egregious or especially heinous, but it is such a recidivist that I can’t see why they bothered.

But when you get the two biggest action stars… Of a quarter century ago… I guess you have to do it.

As the film tells us escaping from maximum security prisons is a piece of cake if you have the know-how, the patience, an eye for detail and the right choc milk. Ray Breslin (Sly Stallone) has been doing it for years. For money. For the FBI. His job is to join the prison population and test the security and integrity of the prison. So far none have kept him in.

So it is no surprise when he and his (unnecessary) team are approached with a proposal. A new top secret facility full of the very worst crime has to offer, in a secret location, purpose built to take the scum of the earth and remove them from the face of the planet.

It’s referred to as ‘The Tomb’, despite the fact that the cells look like a vertical ice cube tray. As tends to come up in the small print, no-one on Ray’s team can know where it is. Furthermore, there is no exit clause. No parole. No back up and no safe word. If Ray fails, he either spends the rest of his life behind bars, or joins an ever growing list of the ‘vanished’.

Once inside he almost immediately meets Emil Rottmayer (Arnie), who is quite the jovial type for an inmate in a prison where torture and mistreatment are routine. Emil finds Ray’s curiosity about the facility fascinating, and Ray finds it disconcerting that Emil asks more questions than a thousand census takers. The outcome of their initial assessments pretty much sums up the film.

Sometimes looks can indeed be deceiving, but that’s pretty much the level of the film. Sly mumbles away at dialogue that would probably be uninspiring even if you could understand it. And for some reason Arnie seems to feel he must play the comic relief, a tactic that only worked in his heyday when the jokes were used to lighten the mood or ease the tension. This is not his heyday, there isn’t tension or darkness here. Here bad jokes are just bad jokes. (Arnie may be a less likely stand up comedian than he was a governor.)

Elsewhere Jim Caveziel yawns through his role as the uptight and callous warden. Vinnie Jones broods and quivers on the periphery waiting to be asked to do something, and Sam Neill seems out of place as the prison’s resident doctor who is called upon for some pretty vague maladies. Visiting the doc about a ‘tummy-ache’ seems a stretch when guys are left face down in a pool of their own blood after vicious beatings.

As for the plot… well we don’t have to worry about the plot, just recall the plots of the 57 other prison movies and fill in the blanks. You could also try Prison Movie Bingo ™. They’re all here;

And for bonus points: The plans that involve split second timing, incredible knowledge of the prison’ sinner workings and layout, insanely implausible coincidences and the presence of constant peril to work…

And as we know, in these films, EVERYONE gets the bonus point.

I’m not a Arnie or Sly hater – far from it. I even shakily endorse their return to the big screen in recent years, although we have yet to see anything great resulting from it. But in the case of Escape Plan, don’t bother concocting an elaborate brilliant scheme to reduce your two hour sentence; just don’t bother going in the first place.

Final Rating – 5.5 / 10. There was once a film that wasn’t released… And in that alternate reality we’d all be better for it.

While I try to throw a joke or two into proceedings when I can all of the opinions presented in my reviews are genuine. I don't expect that all will agree with my thoughts at all times nor would it be any fun if you did, so don't be shy in telling me where you think I went wrong... and hopefully if you think I got it right for once. Don't be shy, half the fun is in the conversation after the movie.
View all posts by OGR →
This entry was posted in Arnie Schwarzenegger, Crappy Movies, Film, Movie Reviews, Sly Stallone, Superstars. Bookmark the permalink.