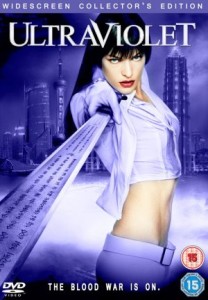 Apparently in the future the only things that survive are lurid, gaudy colours and bad techno.

In this unpleasant future a blood disease has rended the population in twain. The diseased outsiders are called ‘hemophagers’, identified by simple tests and exiled from society where they form a rebellious group of skinny gits.

Violet (Milla Jovovich) is one of them. She steals a very important thing that might be the key to eradicating the hemophager race, and takes it back to the group, where…

Something that ends up looking like the result of a kid eating three showbags full of lollies and then throwing up after one too many roller coaster rides. It’s bright, tacky, technicolour and frankly disgusting.

Take for instance one scene where an unarmed Violet is surrounded by some 25 odd heavily armed guys in a large open space. A few ducks and some carefully timed dodges later, and all the guys that were shooting at her have in fact managed to find themselves killed by stray bullets.

What else? Um, Jovovich puts her 12 year old boy’s body in a series of ridiculous but allegedly stylish poses. She changes outfits and hair colours frequently. She wears sunglasses at odd times and neatly evades the guys shooting at her while wearing fetish clothing.

Despite the violence, despite the action and despite the high body count, the only thing Violet manages to do any damage to is my faith in film, though to be fair she also butchers the sporadic lines of po faced dialogue too.

Final Rating – 4.5 /10. In the future the name Ultraviolet will become synonymous with ‘awful on every single level’. This film only exists as proof that Milla Jovovich is capable of appearing in films with less value than the Resident Evil sequels.