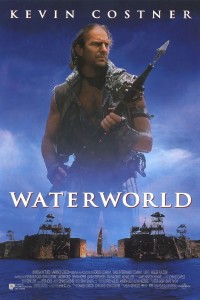 Al Gore was right. The Earth is awash.

Clean water is scarce, dirt is a much valued currency and the few remaining survivors float about, pretty much keeping to themselves.

These floating communities have few worries, aside from barnacles, sunstroke, running out of the little umbrellas for their drinks, and smokers, pirate like bad guys who roam the seas killing and pillaging under the directive of leader Deacon (Dennis Hopper), a fiendish over actor in the same vein as the Great Humongus from Mad Max 2. This is an especially apt comparison given that from the opening minutes in this film it is obvious that this is merely wet Mad Max, literally and figuratively.

When the Mariner (Kevin Costner) arrives, all broody, rugged and alone, to a small community, bringing dirt to trade – seriously what do they do with it? – and zero charisma, it’s another example of bad timing, given that Deacon and his horde of scurrilous types are already en route.

Deacon is hunting for ‘dry land’, only whispered about and commonly thought to be mere myth. Perhaps the Mariner knows the location, or perhaps the small girl with maplike tattoos on her back holds a clue or two?

Despite his bad case of lonerism the Mariner decides he can fit taking care of a woman and young girl into his busy schedule of brooding and tanning, so he takes the two on his large catamaran type vessel, with Deacon in pursuit.

I took two things from Waterworld, three if you think me labelling it as ‘not horrible’ a thing. First, I can’t for the life of me see where the reportedly incredible budget went, sure boats are labelled a ‘wet hole into which you pour money’, but there aren’t that many here, and they are hardly all the QE2. Secondly, with Kevin Costner, Jeanette Tripplehorn and Dennis Hopper, there isn’t genuine star in the cast, nor does the film manage even one decent scene to take away. The action comprises of Costner swinging from ropes and pulleys from one side of the boat and back repeatedly, interspersed with jet ski stunts and occasional hokey dialogue from a hammy Hopper.

With those two things in mind, you can’t call this film anything but a total loss, even though there are countless worse films released both before and since. The problem is that not many of them cost almost 200m.

Waterworld is not Armageddon bad, primarily as Kevin Costner doesn’t have nearly enough personality to be able to manufacture one awful enough to recall that particular braincell macerator.

Final Rating – 6 / 10. Like Costner himself, Waterworld is just boring and unremarkable, and worth about 180m less than it cost.