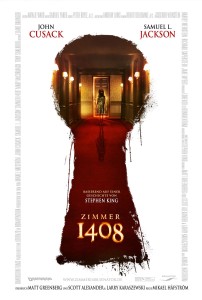 German poster = better than the US one…

Mike Enslin (John Cusack) has made a solid living out of faking stories about haunted hotel rooms. Those in the know all agree that his earlier works of fiction are more carefully cared and meritorious, but lazy tales of possibly possessed minibars and ghoulish Gideon bibles are more profitable.

Slightly more profitable anyway. And imagining a ghost in a short coffee table book is likely easier than coming up with his own ideas (says the amateur movie reviewer criticising the creative work of others)…

For their part hotels love Mike’s fabricated write ups. They bring publicity and business from impressionable morons who ‘want to believe’, but also want the convenience of not having to wash their own towels. And the occasional chocolate on the pillow can’t hurt can it?

So when Mike learns of the ‘Most Haunted Room Ever’ existing in the Dolphin Hotel in New York City, his interest – and waning book sales – is piqued. Upon arriving at the Dolphin and initially being refused his selected room number 203, Mike demands to speak to the manager. A hasty meeting in the head concierge Gerard Olin (Samuel L Jackson) is convened, leading you and I to wonder just how much research Mike Enslin put in to tracking down haunted hotel rooms in the first place.

Olin starts by saying ‘don’t’. Then repeats it to the point that he sounds like the Edgar Wright preview from the Grindhouse films. In between imploring Mike to just walk away, he mentions the 56 deaths in the room. The multitude of other suicides, the ‘accidents’ and various ‘unexplainables’ that should have the actual death toll far higher. He finishes by straight ordering Mike to give up and leave. It ain’t happening.

Mike references an obscure legal loophole and heads up to the fourteenth floor – which is probably the 13th if the hotel adheres to the superstitious tendency if pretending the 13th floor does not exist. Oh wait, I get it! This should be a good story.

Now nothing I write here will do the film justice (and not just because I suck at reviewing films). Anything I jot down will nullify the scares that may ensue. Just know that between the first portentous song emanating from the crappy hotel room radio (with its ominous countdown clock feature) to the culmination of events, Mike endures quite a night, essentially wrestling with a room for possession of his own sanity.

1408 is hardly a classic in the genre but it is oddly effective, and this is largely thanks to the efforts of Cusack. In fact it is his very unflappable and logical reputation that renders his reactions to the nonsense more believable to us “but he’s John Cusack the sensible guy! If he’s scared shitless then it must be real”.

Well real-ish. On second viewing some of the overlapping ridiculousness starts to chip away at the patience.

The film is oppressive and claustrophobic, taking place predominantly in one room but seemingly on various planes of reality and an indeterminate time frame, almost like a ghosty Groundhog Day. Sam Jax is here to pad out his box office stats once more and his principal scene is a good one, but this is Cusack’s flick, and one of the rare commercial horror films with big name stars to actually be worth the rental.

Final Rating – 7.5 / 10. You might be well served steering clear of the Dolphin hotel, but it’s a decent place to visit if you have a spare couple hours and a willingness to suspend disbelief.