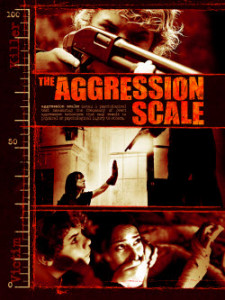 A wealthy and quite deranged businessman is troubled by the fact that someone seems to have stolen money that he has diligently and illegally accumulated. He summons a fearsome foursome of ornery henchmen and sets them to the task with one directive; that everyone on the list of suspects be killed as messily and violently as possible within 48 hours.

So far we have American Kill List, a concept I can live with…

A newly married couple are moving into a new home, unaware their presence on the list guarantees a nasty housewarming gift. More troubling perhaps is the fact that their two kids from former relationships (one each) are aboard, a seemingly mute teenage boy and a slightly older sass-filled girl.

After the initial breach the film plays out like Home Alone, only with the offspring of Rambo and MacGyver.

The Aggression Scale is a great title and has a central idea that suggests a better film should be around here somewhere. Unfortunately despite opening quite literally with a bang (in a scene that disproves the adage that a little exercise never hurt anyone) it never aggressively scales any great heights. There are a couple of decent moments here and there, only with baffling moments in equal proportion. Who pauses during a bloody hostage situation to peruse what is essentially a school report? How did the kids get from the forest to a car park? And more curiously how did the pursuers know exactly where they would emerge?

I dare say The Aggression Scale saw Kill List and thought ‘me too’. Alas it is a killer title lacking the substance behind it, and despite some violence and adult themes it isn’t nearly as edgy and dangerous as it seems to want to be.