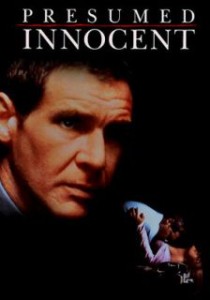 “Being arrested for murder perturbs me”

Presumed Innocent is like the most well conducted trial. It is dry, deliberate and professional and filled with long stretches where nothing seems to be happening.

In this case Rusty Sabich (Harrison Ford), star prosecutor and right hand man to District Attorney Ray Horgan (Brian Dennehy), finds himself on the other end of the gavel, charged with the grisly murder of colleague and rising star in the lawyer ranks Carolyn Polhemus (Greta Scacchi).

All the while Rusty persists that he is innocent even as evidence piles up against him. He is flanked by super cool and efficient lawyer Sandy Stern (Raul Julia) and his wife Barbara, who remains loyal even though she knows of Rusty’s torrid affair with the murder victim.

As the film develops we see the stress that the proceedings and accusations put on Rusty’s career, family and mental state. We learn more about Ms Polhemus last days and weeks and the blurred line between her aspirations for work advancement and ‘extra-curricular activities’. We learn that petty jealousies and resentment can pervade even the most professional work environments, and most importantly we learn just how occasionally inept and easily corrupted the judicial system can be – at least in this film.

Presumed Innocent marketed itself with the steam of the poster, but ultimately while it has a few decent reveals and developments, it can only be described as a ‘very efficient’ film. But what it lacks in thrills and spills, it makes up in competence…

I’m doing a very poor job selling this. Presumed Innocent is a very good court case film for people that are into those sort of things. It has a great cast, a decent plot and perhaps the coolest judge in cinematic history.

Final Rating – 7.5 / 10. While it has all the hooks, surprises and revelations that you expect in this kind of film, there is a reason people fall over themselves trying to evade jury duty. Most court cases are boring as hell. As are most films about the process.