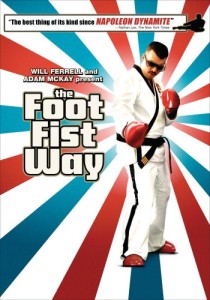 The image conscious Simmons fills over his gaping character flaws with used sports cars and resentful and a disloyal trophy wife Suzie, who puts up with Fred while keeping one eye open for someone – anyone – better. Fred tells anyone who will listen, and many who won’t, how he is a victim of circumstance, and how if the chips fell his way he could be as successful as the Jean Claude Van Damme-esque Chuck ‘the Truck’ Wallace. A board busting high kicking celluloid hero with many films to his name and fans on his dick.

But it isn’t the plot that makes The Foot Fist Way a cult hit. It is the ongoing tone of awkwardness and the inevitability of failure that for some reason draws people to this film. Fred is thoughtless, crass, insensitive and boorish. To his students. His peers. Even his wife. Actually especially his wife. Thankfully though the film steers clear if the Ferrell-isms, meaning Fred can actually fight and train others, even though the editor has his work cut out making it seem so. If Ferrell or Sandler were in the role they would be bumbling and stumbling their way along, with the audience expected to think that black belts could actually be that inept.

McBride remains true to character throughout. No bizarre cutaways or incredible moments of superhero like feats. In fact the characters in the film are its primary strength. It’s just that aside from Chuck the Truck and wife Suzie, none of them are very interesting. Unfortunately I include Fred Simmons among those ‘aside’. Sure he tries hard, and the intensity, misguided passion and cluelessness are plainly evident, but he still isn’t very interesting.

So while McBride and director Jody Hill didn’t take the lazy way out, they also didn’t replace the mugging and stupidity with jokes. Instead we are supposed to be blackly amused as Fred’s world falls around him, at least as far as he is concerned. It seems to Fred that everyone is lining up to let him down, students, wife and heroes alike.

Ultimately The Foot Fist Way is more creative and deserving than films from the usual suspects mentioned above. I can see what they were going for, and in most cases they nailed it. I just didn’t find it interesting, funny or riveting in the slightest.

Final Rating – 6 / 10. Doesn’t matter how you package or market it; 82 lifeless and unfunny minutes are never worthwhile.