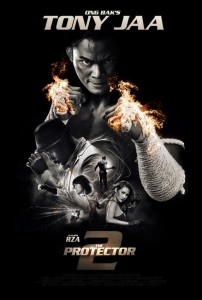 Episode 4 in a series of films that shows the folly of taking things off Tony Jaa. In Ong Bak it was sacred religious artefacts. In The Protector it was an elephant. In The Protector 2 it is our willingness to give Tony Jaa chances.

Now he must strive to break what appears his ceiling, say Jeff Speakman, and frankly this film does him zero favours.

We rejoin Kham (Jaa) back in Thailand after rescuing his elephant from Australia, once again a simple elephant tender. This changes when he is implicated in the murder of an elephant poacher, and Kham must venture to the big city to both flee his pursuers and find his stolen baby elephant friend, who has yet again been taken.

Seeing as Tony Jaa’s scriptwriters work part time – or more likely are paid by his enemies to hold back his career – the rest of the film is a jumbled dog’s breakfast of bad ideas and clumsily realised sequences.

I was disappointed that the opening chase scene took place on rooftops with Jaa pursued by a dozen or so thugs on tiny motorcycles. The action is mind numbingly repetitive, the choreography practically non-existent, as Jaa only need step sideways or jump out of the way (in ways that lack the creativity and dynamic nature of Ong Bak).

In fact Tony isn’t called upon to actually use his martial arts skills or freakish athleticism for some time, and by then we’ve already been introduced to the RZA as the Big Bad Guy, and learn that RZA actually stands for ‘Really Z-grade Actor’. I realise that RZA developed his love for martial arts films with clumsily dubbed kung-fu flicks, but someone really needs to tell him that he shouldn’t talk in that over-the-top grandiose way. It’s as if he is trying to make his crappy directing effort The Man with the Golden Fists look better by comparison. Mission accomplished.

Amazingly RZA’s histrionics aren’t the most egregious use of personnel. For some reason Tony Jaa’s signature moments are diluted by the ridiculous decision to assist his movements with CGI trickery; worse, Cheap CGI trickery.

Whatever Jaa lacks in charisma and acting ability, he is undoubtedly the most physically gifted martial arts leading man on the planet. Giving him CGI is akin to giving Michael Phelps floaties, like giving an F1 driver training wheels, like putting tomato sauce on a gourmet meal. It’s worse than unnecessary, it’s ruinous.

But the director goes on to prove that this isn’t the full extent of his amateurism, he peppers the film with cheesy ‘showdown’ precursors and terrible characters, further to RZA is the identical twin daughters who seek vengeance, the ineffectual assassins who are identified only by number, and of course Tony Jaa’s omnipresent crony, who this time plays a bumbling cop (in fairness he’s always a ‘bumbling’ something).

As the film develops we see more and more of what the director is trying to achieve, and realise that the film’s quality is doomed to deteriorate further. With each clumsy punch, sloppy unfunny joke or CGI tainted movement, the bile rises, and you start longing for the endearing stupidity of Mega-Piranha…

… or, you know, something actually good.

Seriously five years ago I was willing to give Tony Jaa as many chances as required to ascend the martial arts throne. But inferior budgets, hackneyed plots and underwhelming action shook my belief, and the dramatic rise of Iko Uwais effectively stymied any chance of Jaa’s emergence as the new Jackie Chan.

I worry now that Jaa’s ‘career’ to this point could actually be summarised in a few GIFs, and that we’d be better off keeping them and shredding all evidence that they actually were part of a series of shitty cut rate films that squandered him immense gifts.

Final Rating – 4.5 / 10. Bad guys of the world, please stop stealing Tony Jaa’s stuff, it only gets him angry and leads to depressing movies.