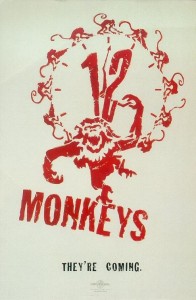 Twelve Monkeys was the arrival of Bruce ‘the Actor’ Willis and Brad ‘the Mega-Star’ Pitt. It is also a supremely confident non-commercial film that somehow managed to slip one past the keeper and find itself in the mainstream despite its dark content and subversive nature.

In 1997 the Earth was stricken by a killer virus. Mankind was very nearly wiped out, with the few survivors literally moving underground, leaving the surface of the planet to the beasts once more. James Cole (Willis) is sent by his underground masters to 1990 to uncover the cause of the outbreak and ideally prevent it from happening.

James Cole is a drooling nutso in a 1990 mental hospital imagining the whole thing.

For a long while the real answer is left up in the air. Regardless Cole finds himself in a hospital where Jeffrey Gomes (Brad Pitt), an energetic fellow inmate with an unpredictable whirlwind of hummingbird energy with the cognitive skills of a goldfish, urges Cole to bust loose and pursue his mission.

Dr Catherine Reilly (Madeleine Stowe) – in medical terms – thinks he’s crazy. She doesn’t even pretend to know about the rebel ‘army of the 12 monkeys’, who are said to have started the future virus. Or something.

Director Terry Gillam creates an off kilter and depressingly gritty landscape, even in  pre-virus 1990. Everything is filmed at disconcerting angles, with the visuals always creative and striking.

Willis plays his role as the confused Cole sans-‘Yippy-ki-yay’, leaving Pitt to pick up all the gung-ho slack, which he does in spades. Whatever you think about Pitt the pretty boy, Pitt the beaten down husband or Pitt the alleged dumb-ass, his performance here is mesmerising, a virtuoso solo oozing personality and edginess.

The film does move on to uncover the truth, which in reality is not so important, because 12 Monkeys is more an exercise in tone and style, an arena for Pitt to announce his arrival and for Willis to establish his cred as a serious actor.

Both aims were met handsomely. Unfortunately as a film 12 Monkeys only hints and teases at greatness, emerging an admirable frustration. I loved the consistent creativity and deliberately stubborn ignorance of normal convention, and the tone and production values are especially brilliant. However the story doesn’t really ‘arrive’ anywhere, leaving a flashy, arthouse mess that nonetheless gatecrashed its way to box office success.

Final Rating – 8 / 10. I admire Twelve Monkeys as the little film that could, but I can’t bestow Greatness upon it.