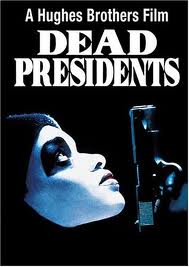 Dead Presidents charts a period of maybe five years in the life of a young black man Anthony, over which he moves from a small time hustler, to a the jungles of Vietnam, through to a difficult reintegration into the post war world and the stress of handling the financial responsibility of a growing family and dealing with a seemingly bi-polar wife.
(If I was Anthony and married to Juanita, I’d paint my face and pick up a gun too.)

Despite all this, all anyone ever references is one five minute scene near the film’s conclusion. Hell that’s all the poster cares about too!

In the end Dead Prez is a two hour tease, an ‘in the life of’ of a guy that goes through an awful lot but still cannot manage to make much of it exciting, memorable or action packed.

It isn’t Anthony’s fault. After all, here is a boy that grew up on the mean streets of a crime filled America, before growing into a man in a world of shit in combat in Vietnam, where Bokeem Woodbine’s character loses the plot entirely and starts toting about a severed Vietnamese soldier’s head in his bag, occasionally pausing to drag it out to chat to the decomposing bonce. Anthony squeezes a lifetime of Big Events and life altering developments into a mere half decade, all while backed up by some of the funkiest and soulful music of the era and a cast of who’s who in African American cinema. Keith David, Terrence Howard, Chris Tucker. Ok maybe some of the who’s who.

It’s just that The Hughes Brothers directing team can never seem to decide what the film is actually about. You think it’s building and that they will settle on an even or a location; its an urban street crime film, no it’s a Vietnam movie, no it’s looking at the social strata of the post war America, no wait its a heist film. Ultimately it’s none of those things and all the poorer for it. You watch all these disparate sequences. You think it’s getting better. You see the painted faces. You realise it’s over and wonder what was all that about?

Final Rating 6.5 / 10. Watch any ten minutes of this film and you’d swear it was from a 7.5 movie. But none of these developing scenes head to anywhere.