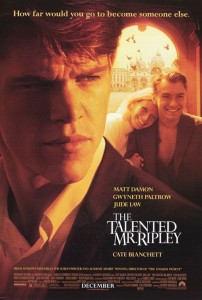 When Tom Ripley (Matt Damon) continued a stranger’s mistaken assumption too far, he had no idea of the implications this opportunistic white lie would cause to him and others.

Shortly after Tom found himself on a plane to Europe to convince a man he never knew that he should return home to the USA .

Only the stranger involved was Dickie Greenleaf, a privileged and charismatic playboy, a son of money with no reason and no inclination to work an honest day in his self absorbed life.

Tom cannot even leave the airport after arriving without another seemingly innocent lie, telling fellow American Meredith Logue (Cate Blanchett) that HE is in fact Dickie Greenleaf and using an alias to travel about low key.

But Tom isn’t finished yet, not by a long shot. Nor is he concerned with his lies collapsing in on themselves or in fact getting found out at all.

When he actually meets Dickie it only takes a few days for Tom’s ability to ingratiate himself and find common ground to work their considerable charms. Dickie hangs with the ‘pretty people’, including his sweet and caring girlfriend Marge (Gwenyth Paltrow) and frequents only the coolest places, living without a care in the world as if the bill will never arrive. Tom impresses and ingratiates himself with his (carefully researched) shared hobbies, and ultimately gains his trust by blabbing the real reason behind his visit.

Dickie in turn is delighted, his response being ‘let’s drag this out and spend dad’s money together, seeing it also as an opportunity to mould this newcomer into his own image.

Meanwhile Tom uses his chameleonic knack and quick wit to adopt Dickie’s identity when the situation allows, effectively conducting a dual existence, one alongside Dickie indulging himself all over Europe, the other more low key, opportunistic and dangerous.

The perils of this facade are of course those that know the real Dickie well enough to spot a fraud, so Tom’s challenge is making sure that those who know him as Dickie must never see him as Tom. The initial threat is Meredith of course, the first person to meet the fake Dickie, although Freddie (Philip Seymour Hoffman), a smarmy longtime chum of Dickie’s, senses something is amiss with this fresh faced young upstart.

With his elaborate multi pronged ruse in danger of being discovered Tom is forced to take his scheme much further than he ever thought, but above all he doesn’t want to leave this plush lifestyle he just fell into.

This film is indeed labyrinthine and complicated at times, and the film – like Tom’s ruse – occasionally appears in danger of getting too clever for itself. By both film and Tom prove clever enough to extricate themselves from every tight corner with aplomb.

The top notch cast helps. Jude Law plays Dickie as a guy with so few problems that he delights in poking at the flaws of others. He could be a nice guy, but he finds that a little boring. Paltrow has a little less work to do in the early stages, but her character has a nice arc in the closing stages of the film, and Philip Seymour Hoffman plays the pompous git and potential whistleblower role a little too well.

Of course the centrepiece of the film is Matt Damon as Tom/sometimes Dickie, a handsome and friendly lad with a lot going on behind the disarming smile. Damon has proven his acting chops before, this only cements his position as that rare box office draw who can actually do more than be pretty.

The Talented Mr Ripley ends a little too neatly to grant it Great status, and at 2 1/2 largely action free hours it might prove daunting for the impatient, but it is a first rate drama and worth your time.

Final Rating – 8 / 10. A great central character, top notch drama and picturesque locations. What’s not to like?