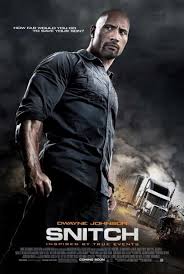 Snitch begins in a chillingly realistic way when a teenage boy does something stupid. Only in this case the penalty for accepting a parcel of drugs on behalf of a mate is a minimum ten years in prison. That’s a lot of time for young Jason to think about the definition of stupid.

Jason’s dad is John (The Rock). John is a fine upstanding man running a trucking business and being there for his second wife (Nadine Velasquez) and second child. His ex-wife Sylvie is Jason’s mum. After some tears, hugs and self-blame, they expect Jason to cop a smack on the backside, after which he will be grounded for the summer. Then district attorney Joanne Keegan (Susan Sarandon) cold-heartedly tells John and Sylvie not to expect to see Jason without a striped tan until he is nearer thirty.

Unless Jason gives up someone else. A bigger fish up the drug chain. Jason tells his parents that the only drug dealer he knew was the one who sent him the package. And he is already in jail too. (I guess the moral of the story is ‘always know more drug dealers’.)

All seems lost. But remember that earlier bit about John being a nice family guy? (Also he is The Rock.) He tells DA Joanne that “I will bring you your drug dealer”, and off we go…

The first step to getting into the crime business is apparently finding a sponsor. Someone to vouch for your scuzziness. John believes he has that on staff with ex-con Daniel (Jon Bernthal). Using Daniel and his contacts as an ‘in’, John swiftly finds himself up to arched eyebrows in crime and the perils that go along with it.

The film also doesn’t shy away from the human side, going far beyond the usual kidnapped girl who needs saving. Both John and Daniel find their families in danger as they advance up the crime hierarchy and the stakes rapidly rise. This leads to increased interest from the DA’s office who can smell a big catch, and from vicious and calculated crime lords.

The Rock has had a checkered filmography to date, with the occasional pleasant surprise (The Rundown) tempered by bland filler (Tooth Fairy, Walking Tall), stuff that found WWE viewers because The Rock was on the poster. Snitch just might be the film that proves Dwayne Johnson can both fill a poster and a role competently. It is both a compelling drama and an efficient action flick, with that rarest of sub-genres being ‘Action and violence… With justification!’.

Johnson holds his own in both environments, trading barbs with Susan Sarandon (and Barry Pepper as an undercover agent), and bullets and car chases with the drug world’s nastiest.

I found myself becoming more involved as the film went along, and enjoying the film far more than I expected. Snitch starts out in one direction and dabbles in a couple more genres before it finally comes around to something indicated by the poster above. By this time it has more than earned a little action indulgence. This might be the film that converts WWE guy turned actor The Rock, into full time movie star Dwayne Johnson.

Raise your eyebrow to that!

Final Rating – 7.5 / 10. Snitch deserves to have more people ‘dobbing it in’ – as one of the better films in cinemas at present