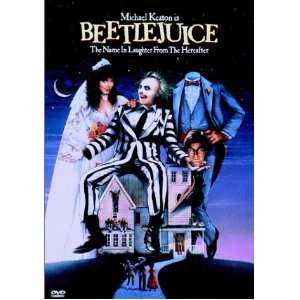 At the core Beetle Juice is a baroque kid’s bedtime story brought to life by a scene stealing performance by Michael Keaton and backed up by Tim Burton’s unique visual aesthetic and black sense of humour.

Life is hard, but as idealistic young couple Adam (Alec Baldwin) and Barbara (Geena Davis) being dead is somewhat harder, especially when you don’t realise at first.

When their dream home is unceremoniously converted into the eternal resting place for their spirits – thanks to an act of dog – this cloying pair of devoted ‘newlydeads’ decide to maintain a stiff upper lip and make do. Then they find that their home has been sold to the Deetz’s, a family that could only exist in a Tim Burton film.

Husband Charles is an uptight self important businessman looking for a quiet reprieve from the city bustle, wife Delia is an over the top whirlwind of unnecessary energy who aggravates all around her, and daughter Lydia (Winona Ryder) is a semi-suicidal emo-teen who hates her life and her family.

Lydia is probably the most sane of the bunch.

Adam and Barbara look on with horror as Delia and her smarmy pompous interior designer Otho commence destroying all that they painstakingly built in the name of ‘style’. But they are not yet aware of their powers and limitations – they haven’t even read the Guide for the Recently Deceased that was thoughtfully left for their perusal. There is a scene set in purgatory’s waiting room that allows Burton freedom to explore his wildest ideas, it is the most memorable sequence in the film. 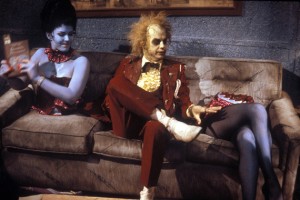 Beetle Juice, or more accurately Betelgeuse (Michael Keaton) is the film. Without his incredible (though all too brief) performance as the charismatic bio-exorcist (remover of unwanted living spirits) this film would sputter to a dead stop. Keaton’s Beetlejuice only arrives about half way through the film but revives and restores the energy and more importantly the sense of unpredictability.

Even in this early Burton effort all of his now familiar traits are evident, the favouring of sets, costuming and off kilter imagery over story, the gothic themes.

The ‘Day-O’ scene still holds up well, the purgatory waiting room remains excellent and the giant sand worms amateurish but effective. Despite several projects with muse Johnny Depp I feel it was Michael Keaton as Beetle Juice that was the most indelible character that Burton has as yet created. Unfortunately he was consigned to a supporting role in what is essentially a one note film with a threadbare plot.

In the moments that he is there though, Beetle Juice zings along.

Final Rating – 7 / 10. Keaton is an adrenaline fuelled force of nature in this film, throwing everything at the film and having most of it stick. His performance will stick with you, as will some of Burton’s images, alas the story will not.