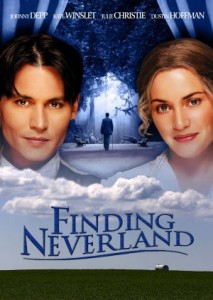 I watched Finding Neverland about a month ago, but I haven’t written about it until now. (Normally I write my reviews the same week I watch the flick.)

The primary reason – for once – wasn’t laziness but fear. It is exactly the same predicament that I find myself in after watching Eternal Sunshine of the Spotless Mind, something I have done twice since starting this site.

The fear emanates from the fact that both this and ‘Spotless’ elicit… you know… oh don’t make me say it… oh alright… FEELINGS and stuff.

Put more succinctly both films make a liquid substance well up in the corner of my eyes. Precious few films do that, well maybe my wedding video – but that is another reason entirely. (I’m kidding! I burned our wedding video…)

Finding Neverland shows the family that provided the inspiration for famed writer J.M. Barrie (Johnny Depp) when he came up with Peter Pan, a story that has since been told to millions of wide eyed children the world over.

Despite many projects being developed and performed as stage plays, Barrie was wracked with self-doubt, amid a period where his writing was becoming less and less powerful, and his marriage to Mary (Rahda Mitchell) less and less meaningful.

Each day Barrie would leave the confines of both home and marriage to take his large dog to the park, where he would sit and watch the world go by, hoping to find something to spark his next great literary work. It was on one such day that he met Sylvia Davies (Kate Winslet) and her four young sons.

Unlike the present day a solitary man sitting on a bench talking to small boys wasn’t seen as grounds for a summary lynching carried out by a frenzied mob, in fact Sylvia and especially the boys quite enjoyed Barrie’s company – especially his storytelling abilities. Where the kids saw a shaggy dog lying on the grass, Barrie described in vivid detail the real whimsical truth behind this shaggy bear.

Each day the two parties met, with the children swept away as the tales became more interactive, and the locales eventually moving to the Davies’ residence, where they evolved into games and interactive fantasy, all while the delighted Sylvia watched on.

And while Mary sat alone in her own spacious home, wondering when her husband would return home from visiting the Davies’ children… and their single mother.

Of course Barrie was oblivious to all this, for as well as living through the children, his own screening process of logic was almost as juvenile, not caring how this grown man looked to outsiders such as his wife and Sylvia’s concerned mother. Barrie lived vicariously through the children, rediscovering his own sense of wonderment and inspired by their energy and spark. The only child that didn’t seem to share his ‘you’re only as young as you feel’ motif is Peter (Freddie Highmore), a child all too serious and weathered beyond what a small innocent child should be. It seemed that Peter wanted to grow up too fast, with Barrie concerned that he would miss out of the simple joys of an uncomplicated childhood as he did.

One day he announces to the children that his latest work is a fictionalised version of their escapist games and backyard adventures. Furthermore he asks young Peter if he can name the hero in his honour. And Peter Pan was born, with the project explained to an extremely doubtful Charles Frohman (Dustin Hoffman) Barrie’s longstanding production partner and owner of the local theatre. Frohman reasonably questions if a play about a man, some boys and a fairies will be the one to break Barrie’s recent string of flops. Regardless of his doubts, the play enters pre-production.

Then with everything seemingly moving in the right direction, Sylvia reluctantly informs Barrie that she is ill. Despite her staunch protestations and constant brave face both Barrie and the kids fret that it might be far more serious than she is letting on.

While essentially about the genesis behind one of history’s most renowned stories, the core of Finding Neverland is the relationship between Barrie and Sylvia – which I would point out immediately is not of the ‘behind closed doors’ variety. There are no knowing looks, longing glances or handshakes that linger, simply two adults that are aware of what should logically be, but will never eventuate due to circumstances beyond their controls. Even when Mary leaves her husband the united front of ignorance to the facts remains steadfast.

Whenever ‘real life’ becomes too hard for Barrie he retreats into his play like a kid to a playroom, but an innate sense of maturity and reality keeps bringing him back to face the ever more depressing music, in that way Finding Neverland is equal parts uplifting fantasy and sobering reality,

There are times – especially around Oscar season – that I wonder if there is a noticeable difference between merely ‘adequate’ and ‘award-worthy’ acting. I mean ruling out rank amateurs if you give two decent actors the same script, will there really be a huge difference in the end result? Well I consider Finding Neverland to be Exhibit A that sometimes excellence is supremely evident. Depp and Winslet are both at the top of their considerable powers here, with the more emotional scenes nearer the film’s conclusion brilliantly underplayed and all the more powerful for it. Freddie Highmore is equally sensational as Peter, the kid who will not be fooled by grown-up nonsense and misdirection. His incredible delivery of heartbreaking dialogue, while still reminding us that this is ‘just a kid’, demands acknowledgment.

I have now watched Finding Neverland a few times. Each time I wonder if it’s that I’m run down, or just in one of those moods, or if the pollen count is unusually high – but regardless of the truth – each time I watch it I get more emotional than in 127 purpose built tear-inducers that are trotted out each year. Despite this my over-riding thought is that J.M. Barrie had the right idea; every now and then we all need reminding that above all being a kid should be fun.

Finding Neverland isn’t always fun. But it is always great.