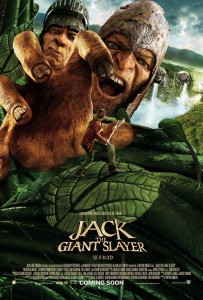 Might be impressive in 3D. Not so much on regular DVD.

Jack the Giant Slayer tries to throw millions of dollars at a children’s fairy tale and sell it to teens. Good luck with that.

Despite the poor judgment – and some pretty dodgy CGI – the film would actually be pretty good for kids say 10 to 14. Shame they’ll never look up from their iPads (or whatever next gen stuff is presently eroding their attention span) long enough to see it.

Jack loved the tale of Erik the Great as a kid. He loved the tale about how Erik drive the giants back to their floating land between heaven and Earth. Young Princess Isobel loved these stories too.

Now a strapping young lad, Jack no longer has the luxury of kid’s stories. Not with a struggling farm to keep from going broke and a mean Uncle to placate. Isobel also has problems, though far more of the #firstworldproblems variety. Specifically she wants to be treated more as an individual than the future queen, and she resents the fact that she is to marry the much older Roderick (Stanley Tucci), a man who it must be said never even tries to hide for a moment the fact that he is a heartless prick.

A trip to the city. A lopsided off-eBay transaction. Some magic beans. A dash of rain and hey-ho the Princess is atop a giant beanstalk stretching into the clouds. In Jack’s house. With him at the bottom.

Jack teams with scummy Roderick, noble Elmont (Ewan McGregor) and various fodder, and heads up the immense garnish to rescue his princess.

It doesn’t take long before they come across the giants. Huge, smelly, farting slobs with a taste for human flesh and coarse cockney accents. While the accents are grating it is the taste for flesh that is of most concern, especially now the stalk is effectively providing a fireman’s pole down to the human buffet below.

Meanwhile, the King and his loyal citizens stand about eyes skyward, waiting for news, in a kingdom so clean and pristine that is simply must be nominated as the Best Kept Realm for the seventh year running.

Again Jack the Giant Slayer should be viewed as teen fare, almost entry level Lord of the Rings stuff. There are deaths aplenty, but none onscreen, and while the giant appetites are indulged at times, it is more played for laughs. One scene has a chef preparing some pigs in the blanket with actual pigs, before adding a tasty human morsel to the menu.

The script will win no awards for originality, not with appearances of both “There’s someone behind me isn’t there?” and “I’m getting a very bad feeling about this” in the same quarter hour span. But all in all I can see some kids allowing themselves to be taken in by this tale of an un-charismatic young man and his efforts to save a princess from towering giants.

All 37 of them. (Gee I hope this film was as cheap as some of the CGI looked.)

Final Rating – 6.5 / 10. A niche film servicing a niche that will likely never see it. Like a burlesque show for the blind.