Harry and the Hendersons (Review) 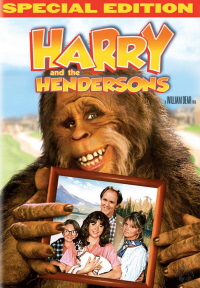 When keen outdoorsman George and his family of miscellaneous Hendersons – at least a wife and two young kids by my count – set out on a part camping, part ‘find the 7 year old son’s inner hunter‘ trip in the woods, they weren’t expecting to make friends. They were expecting to kill innocent fluffy bunnies.

Nonetheless as their classic 80s American station wagon wound its way down the tree lined loads, fate conspired to introduce them to Harry. At 55 mph.

Ordinarily meetings at such velocity end poorly for all involved, but not the Hendersons, and amazingly enough not Harry, who happens to be a 7 foot tall Bigfoot covered head to toe in thick matted hair.

Being a kid friendly affair Harry doesn’t rip George limb from limb for his vehicular affront, nor does George take his hunting rifle to Harry in self defence – though he comes close. In fact after some communication issues and property damage, it seems that both parties will get along just fine, much to the chagrin of the teenaged Henderson daughter.

Then Harry answers ‘the call of nature’ (so to speak) and simply wanders off, a dangerous development with the blissfully ignorant locals, zealous cops and a downright maniacal career Bigfoot hunter on Harry’s Shaq sized shoe trail.

In a film where we are expected to believe an unshaven Kardashian is unleashed upon an all American family, two questions need answering. So I will do just that.

The answer to your first question is that ‘yes’, the Bigfoot costume is actually very well realised even without any CGI whatsoever. But costume notwithstanding, it is the eyes that make Harry a character. The answer to your second query is ‘yes’, Harry and the Hendersons is a kid’s movie. Maybe not for those under 10, in fact maybe not for those over 12, but a kid’s movie regardless. It’s charming, innocent and harmless, much like Harry himself.

Unfortunately though this harmlessness is the very reason Harry is long since forgotten, as kid’s don’t stay 10-12 for that long, and there are more than enough x-boxes, TV shows and talentless Biebers about to fill those two years, without worrying about a 25 year old film about a mythical creature.

Final Rating – 7 / 10. If you do have kids in the right age bracket, this is a good film. Good luck getting them to watch it though.