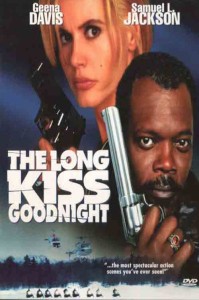 Samantha is a 30 something white suburban single mom. She has lived a middle class, clean living existence for as long as she can remember. Which is exactly eight years. You see that was how long ago Samantha was ‘born’, after an unknown incident left her with permanent amnesia for all that happened before. But she has settled in to her new life well, with a nice home, a nice boy friend and an adorable young eight year old daughter.

Over the years Samantha has tried everything to recall anything about her former self, to no avail.

As luck would have it the very day that Samantha was running off the road and into her past, a scuzzy opportunistic private eye named Mitch (Samuel L Jackson) that Samantha recently hired makes a discovery that he feels will be a breakthrough in identifying her real identity. I don’t know if its also luck or coincidence or simply the script pushing its luck, but that same day Bad Guys also realise that the Artist currently known as Samantha is actually someone that they are very interested in catching up with.

It probably requires telling that Charley, Samantha’s actual name, is an especially well equipped woman with a set of skills that makes her a nightmare for people intent on stirring her up – to paraphrase Taken. She and Mitch set off to cover over some of the cracks in her memory and to piece together the events that lead to her amnesia.

Brian Cox appears as a man who knows exactly who Charley is and what she is capable of. He is also one of the few guys who seems to like her. Not many guys like her, most want to do her harm.

As Samantha learns more about Charley she realises that she must eventually make a decision; continue her current WASP-ish existence, or go back. More disturbingly is that Charley seems to be pushing through her subconscious. Can she hold Charley back? Or does she even want to?

The Long Kiss Goodnight has two things going for it, a whip smart ‘movie’ script by Shane Black with pithy dialogue and attention to detail that justifies even the most ludicrous and unlikely events – and need I remind you that this is a film about an amnesiac hit woman? – and secondly great action sequences directed by Renny Harlin (Die Hard 2).

Unfortunately it was Renny’s influence in one other key area that doomed the film commercially. He insisted that his then wife Geena Davis was set to be a mega-star and cast her as Samantha/Charley. Geena Davis is a decent actor and seems nice enough, but does anyone remember that 90s mega-star Geena Davis?

Thought not. Which is unfortunate, because The Long Kiss Goodnight should have been as good as The Last Boy Scout, a ridiculous – and ridiculously entertaining – action comedy. It has the action. It has the cracking dialogue. It has a decent enough plot. It has Sam Jackson. It just lacks that leading actress to put it over the top.

Final Rating – 7.5 / 10. The action and dialogue are top notch. This is a film one casting coup away from greatness.

Fun Fact: The Samantha/ Charley combo nearly freezes to death four times in this film. Dunno if that’s supposed to be an underlying theme or a sign of diminishing inspiration…