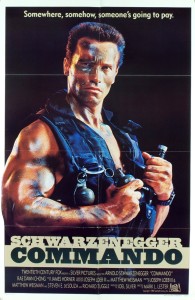 Arriving hot on the heels of The Terminator, Commando is a quickie one note cash-in of a film trying to capitalise on the sudden fame and immediate star power of a young Arnold Schwarzenegger. It is cliched, clumsy and stilted. But gee whiz if this isn’t a guilty rush of retro tinged silliness.

The opening scenes set the tone, with a montage of cloying father daughter moments. John Matrix (Arnie), might be a heavily muscled, well armed expert killer, but at heart he remains an embarrassing geeky dad to a young Alyssa Milano.

Then the plot arrives to whisk her away and distract us all the way to 80s action nirvana.

It seems someone is killing off Matrix’s newly retired former army colleagues, working their way towards him despite his secret location and new identity. With his daughter taken – call Liam Neeson! – the fiendish bad guy played by Dan Hedaya delivers an ultimatum to Matrix; kill some bigwig or your daughter gets it.

Matrix might well have been a crack soldier in his day, but he obviously doesn’t like orders. In fact every time he gets told to do something in this film he does the exact opposite.
So it should be no surprise that instead of playing ball Matrix decides instead to hunt down his daughter’s captors to hand deliver some heavily accented justice of his own.

What ensues involves a lot of supreme effort, with much overdubbed grunting and obvious stunt doubles. Cindy might be a random bystander at the airport, but she quickly becomes Matrix’ accomplice, although Rae Dawn Chong only alternates between shrieking incessantly or adding to the bad acting and awfully cheesy one liner’s quotient.

The finale gives Arnold his first bona fide ‘tooling up’ montage – a technique that became an action movie staple – which is followed by Arnold laying the smack down on an entire island swarming with armed soldiers commensurate with the population of Japan.

In these films realism is a bore, accuracy a luxury for other’s to worry about and continuity only for slaves to convention. Take for example a 20 second sequence where Matrix guns down soldiers in a hallway with a machine gun, followed by an instantaneous edit to another angle where he can be seen holding a shotgun, followed by still another seamless shot of him leaping from a balcony before rolling and rising with yet another weapon, this time an M16.

I mean if we don’t roll out eyes at one guy taking out hundreds without enduring as much as a scratch himself, what right do we have to doubt his Swiss army machine-shot-M16?
Commando is ridiculous and stupid. Ridiculous and stupid like an awesome action fox!

Final Rating – 7 / 10. Everyone needs a big dumb guilty pleasure. Women can have the Kardashians. I’ll take Arnold throwing a pipe sheer through a grown man and suggesting he ‘let off some steam’ thanks very much.