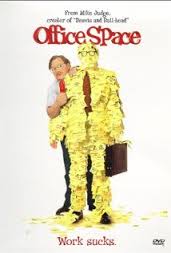 Office Space is one of those rare films that has garnered a cult audience and actually deserves greater awareness.

The problem it faces is that most of the jokes and situations will only ring true to those who work or worked in a large office environment. It’s hard to relate to one nerd’s protective instincts towards a stapler unless you’ve been there.

I have. In fact not only have I worked in various offices alongside thousands of many and varied colleagues for over two decades, I have witnessed much of what goes on in this film; the slacking. The jargon. The inane chatter and forced cheeriness. The smarmy clueless boss. The TPS reports. 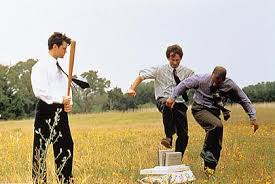 Also, like the Michael Bolton character, I am a pasty uncool white guy who loves hip-hop who must stew in frustration when lunch room chat turns to how awesome Taylor Swift’s music is…

Peter is the vaguely normal 30ish guy killing time until either death or retirement arrives at the medium sized company called Initech. As he candidly informs the higher ups Peter only works ‘as hard as he needs to avoid attention’, which in an office of under achieves isn’t too hard.

When Peter is hypnotised during couples therapy – but never snaps out of his trance – he instantly sheds all baggage and things that may cause him stress, which is a lot.

In an instant Peter is at peace. He works when he wants to. And he usually doesn’t want to.

He can ignore the useless boss that seems to do nothing but sip coffee and talk rubbish. He can forget that his girlfriend is a vacuous tramp and make a bold move for the waitress in the family restaurant near work. He can ignore the fact that the bookish and quiet guy in the corner cubicle is a bespectacled simmering kettle of insanity…

… But that doesn’t mean everyone should ignore him.

Office Space finds the humour in the banal grey existence that being a desk bunny provides through a steady stream of observations and subtle lampooning. It doesn’t reach for the stars or veer outside of its lane, and this unassuming attitude and some incisive characterisation will connect with any working schmos who have ever had the misfortune of being handed a pen with your name on it, while the giver of said pen beams away as if they expect you to weep with joy.

Final Rating – 7.5 / 10. More genuinely amusing than any memo or boss’ speech at the office Christmas party could ever hope to be.