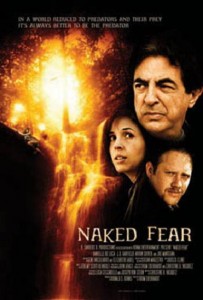 The poster is the only thing even vaguely professional about this film.

When a movie tries to cash in by attempting to add a softcore element to the horror genre, I don’t much feel like talking it up. So this will be a brief outline of a pointless, shitty film that highlights only some of the many deficiencies.

After some of the cheapest and nastiest title graphics that I have seen since Beta was around the movie opens with a nekkid chick in a field.

PIM! Arrow in the back…

A shady character walks up to her.

BONG! Bullet in the head.

She is buried in a shallow grave.

From here on in bad acting is rampant.

Set in a “sleepy town” where a new L.A. cop is having trouble adjusting to the decelleration in pace. One of his superiors is Joe Mantegna, in arole that will not rate highly on his CV. The rookie realises that there are a lot of missing persons in the town, most of them are young women.

Meanwhile we meet Diane, a newby to the town bought in by the promise of dancing work, only she is tricked into stripping an pressured into a little more for extra cash.

Some locals take the L.A. cop hunting, apparently they take quite frequent excursion for that purpose.

Missing chicks. Young girl away from home with no local ties. Hunting.

Diane is predictably taken, stripped naked for no real reason and hunted for a laugh after being given a 15 minute head start. For some 20 minutes this we follow the action, even though it is neither tittilating nor exciting, and also not very interesting unfortunately.

Some things of note:

– The new Cop buys his pretty hot wife an “I’m Taken” T-shirt! And she wears it in public!!
– The bad guy is able to track barefoot (and everything else) Diane through harsh terrain, streams and rocky outcrops.

In one scene though he walks over her tracks and despite having a minimum 30 KG on her, and also wearing heavy hiking boots he leaves no mark of his own! He must have twinkle toes.

Aside from that this is low budget (and how) and low inspiration stuff all the way. Aside from one scene (that it actually unnecessary), there is nothing chilling about this. It is dull, straightforward in a bad way and only gets viewers due to the keyword in the title.

There is also a turrrible twist near the end that if anything makes a sucky film even suckier.