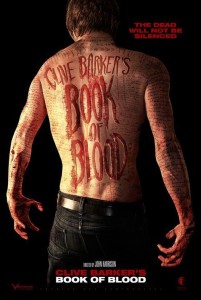 To my mind Clive Barker creates great characters that look good in a display case of a comic book shop but who all too frequently appear in crappy films. I have seen three or four Hellraisers, Nightbreed, Candyman, Lord of Illusions and Midnight Meat Train and the best I can say about any of them is that they were OK.

Book of Blood isn’t going to bend your brain or change the way you think about life, but it is a little better than most of those listed above.

The strength of B.O.B. is the deliberate pacing, there is a long slow build up that always seems to be going somewhere, and when the pay-off eventually arrives because we have waited patiently for it, it is rewarding and suitably macabre.

The film opens with a creepy middle aged guy casing a scungy guy who is eating brekky in a cheap diner, he walks up to the unfortunate looking guy and promises to “help him out” just as the bloke passes out. You know this ain’t going to be pretty.

The guy wakes up hog-tied, never a good situation, even less so when your captor calmly informs you that you are about to be skinned.

Upon semi-disrobing the guy the captor exclaims something along the lines of “My you’re a Book of Blood”. This buys the captive some time while he recounts the origins of the many scars and blemishes that appear all over his body.

We flash back to happier times, the birds are chirping, the flowers in full bloom and neighbourhood kids are squealing in delight at the news of Michael Jackson’s death…

OK so none of that happened really, in this film at least.

A university lecturer Mary is investigating a case, earlier seen in the film, of a young girl who died in a horrific yet cool-looking manner in her home. She decides to investigate and brings along some guy who is her techy buddy, (the guy with all the ghostbuster equipment to take readings and film stuff), his name is Rhett.

They move into the home of the deceased to set up shop, at which time they see “Don’t mock us” written in blood on the walls.

Given what we have seen in previous minutes of the film it seems pretty good advice.

The next day in Mary’s class a new student named Simon shows up. He has visions, so Mary says the more the merrier and invites him to stay with her and Rhett and “look into things”.

Simon, being the vision guy, decides to stay in the naughty room where everything happens, good for a nightclub, bad for a haunted room.

What do you think ensues? Of course, summin’ happens to Simon. More than once in fact.

Rhett thinks that Simon is having them on, Mary thinks that he isn’t, and on top of that thinks he is a bit of alright, which leads to an unnecessary yet worthwhile dream sequence.

Moving forward is hard without giving things away, needless to say both Simon and Mary have pasts, and that we know in a film entitled Book of Blood, which on top of that is written by Clive Barker, that we will see some freaky shit at one point.