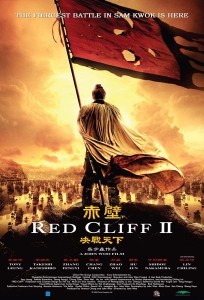 “I will not put down this flag!”

Apparently the Red Cliff movies are very skewed towards a more bias “truth” that changes events to the point where it is less an historical drama than it is a reimagining. Even though I did Chinese history in high school I did more modern stuff, and in any case I am reviewing a movie, not fact-checking it.

Given this is Red Cliff 2 we start with an “In last week’s episode” flashback, that thankfully condenses the first movie into a tight 3 minutes, and also multi-tasks the credits in there as well.

A good thing when the movie is more than 2 hours long already.

The opening scene doesn’t bode well for the viewer, it is a tacky soccer game filled with dumb coincidences and forced bits, at the end of which we are expected to believe that a dumb soccer player and a woman in the crowd masquerading as a male soldier become instant fast friends. More than that no-one, including the dumb soccer guy, know she is a chick until the end of the film.

My 20 second update for you at home:

Cao-Cao: The bad guy, controls the other bad guys. Confident and arrogant.

Zhou Yu & Zhu Ge: The good guys, both impossibly cool and nice regardless of the circumstances. From different armies though now close friends and allies. Zhou Yu runs the show while Zhu Ge is more a 2IC/confidante in the wings.

The scenario: The two armies are separated by a river, Cao-Cao has a greater navy and army, the goodies are holed up in their fortress. Both sides are second guessing the strategy of the other.

Back to the war. Cao-Cao’s army is stricken with typhoid, suffering many casualties, and rather than allow all those good bodies to go to waste Cao-Cao simply floats them  across to the goodies’ side, where for some reason rather than saying “Ew gross! Dead Chinese guys!” They drag the rafts onshore and go about pickpocketing the corpses.

OK I can sorta see it now.

Another goodie Army leader Lui Bei decides “Fuck this for a joke” and leaves, taking his previously loyal army with him. Rather than start an in-fight Zhou Yu thanks him for his time and lets Lui Bei go.

Meanwhile Cao-Cao locks his naval boats together in a seemingly impenetrable line near his armies’ shoreline, to ward off attack.

There are spies on both sides at all times, though they seem privy to more info than your normal spy might get.

The goodies desperately need arrows, and they also want to cause disruption and unrest in Cao-Cao’s forces to divide the army. In a little over 10 minutes of screen time Zhou Yu and Zhu Ge manage to do both, opening up the potential for an attack.

Cao-Cao is pissed with proceedings, and orders an attack himself in two day’s time. Also, the typhoid outbreak is only getting worse, so Cao-Cao needs to get things done while the health of his army allows.

It turns out that it isn’t whose army is bigger or stronger, or whose tactics are superior, but who is a master of the weather condition that will decide this contest.

And I guess in a film like this that isn’t really important, especially when John Woo is the guy behind the camera. We have a lot of BIG EXPLOSIONS, much wire work and some slow mo scenes that seem more dramatic than they should be.

And doves. Must remember the doves.

Final Rating – 7 / 10. In a two film series where both films clock in at over two hours the worst thing that  can happen is that you get bored. I wasn’t bored with this. But at the same time I can’t say I long to sit through either film again.