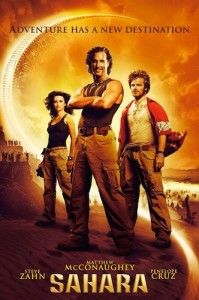 Sahara is the cinematic equivalent of its star Matthew McConaughey, it is big, bronzed, well meaning, amiable in an awkward and forced way… and I would be just as happy if neither existed.

Shirtless Matt is Dirk Pitt, a fearless treasure hunter and all around good guy aboard Admiral Jim’s (Bill Macy) vessel.

Pitt can’t help him but save humanitarian volunteer worker Eva (Penelope Cruz) when he senses she is in trouble, and with three days between jobs for Admiral Jim, Pitt and his sidekick Al (Steve Zahn) agree to accompany the woman they just met on a mission to find extremely valuable treasure. Eva on the other hand wants to prove that a pattern of sickness inflicting local Africans is in fact a potential outbreak that could turn into a global plague.

But it’s mostly the treasure.

Luckily for all parties and the film the lost treasure ship and the trail leading to the origins of the plague are at the same place. Unluckily for us this means more than a few bloodless and bland action scenes and numerous opportunities for McConaughey and Zahn to display their lack of synergy and comedic ability.

Clocking in at a daunting two hours, this Indiana Jones via Romancing the Stone wannabe is way too long, too bland and too boring to justify its existence.

Now only a couple days since watching the film I can really only recall one sequence that momentarily woke me from my apathy, a that was a boat chase that might have lasted five minutes.

The only five minutes that distracted me from a film where A/ Matthew McConaughey was the rugged action hero B/ Penelope Cruz was the earnest and well meaning – yet spunky – humanitarian, and C/ Steve Zahn is the comic relief.

Best five minutes of the film. Not even close.

Final Rating – 6 / 10. By all means watch it and enjoy the carefully choreographed competence. Just don’t get your hopes up.