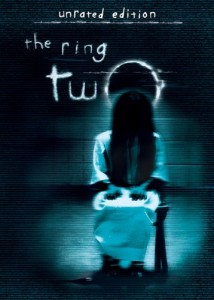 I think the numerous fawning references to The Ring on this site make my love of that film evident enough. Just to be sure let me say it again for the cheap seats: The Ring is the best commercial horror film in history.

The Ring Two finds Rachel and son Aiden shortly after their move to a new town – an understandable decision given how their last home worked out.

Rachel is still writing, though the new town is smaller and therefore has a smaller, more low key newspaper. Max (Simon Baker) is her editor.

Aidan is still creepy and more annoyingly mature beyond his years. He still refers to his mother as Rachel.

And he stills sends the girls crazy, as we find when the tormentor from this first film, the young hellion Samara, finds them both within 5 minutes flat. Only now it seems Aiden has a similar effect on not only lank haired spectres, but insects, other people and most notably deer, in perhaps the best scene in the film. 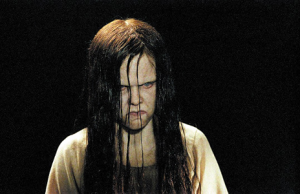 “I said No Sequels!”

Samara, like most teenaged girls, is not nearly as patient or subtle nowadays. She pops up more regularly than most kids brush their teeth, and after a while her appearances become about as scary.

But her presence has more impact on young Aiden and his health suffers to the extent that he is hospitalised. When the tests prove nothing medical, the focus of the enquiries turns to Rachel, who’s ‘not me it’s a scary ghost’ alibi is met with raised eyebrows all around.

For her part Rachel sees Aiden’s hospital stay as unpaid babysitting, and uses the time to pursue another set of clues provided by unsettling imagery, which once again takes her to ‘haunted horse ranch island’, and to a ‘possessed kid whisperer’ played by Sissy Spacek.

The Ring Two is just as slow but not nearly as creepy as the original.  It tries to compensate with bigger set pieces (the deer sequence being the best) and by having Samara appear earlier and more often, but all the bounce has gone from this bungee.