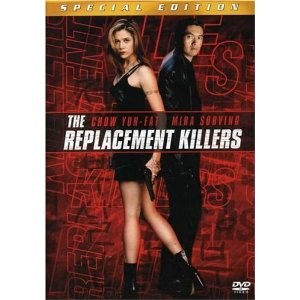 Chow Yun Fat was one of the coolest guys alive in the 90s. He practically invented the ‘running around shooting two guns at once’ thing, while controlling China’s population better than the one child policy ever did. And he dressed well while doing it.

Then, like Jackie Chan, Jet Li and Chow’s frequent director John Woo (who is attached to this film) before him, Hollywood sought to import him for use in their films. The result is better than many but still only OK.

The opening scene at least displays how cool Chow Yun Fat was. He enters a crowded nightclub full of sweaty dancers and manages to effortlessly navigate through the throng untouched and unnoticed, arriving at his target’s table just in time to gun down several bad guys as they all reach for their own weapons in conveniently choreographed order.

Then he is gone without a trace.

He is John Lee. We now know that he is a dangerous individual, in the ensuing scene we learn why. Lee is working for Mr Wei, a Chinese mob boss who has Lee performing several hits for him for reasons we discover later. When Lee draws a line in the sand with the next target in his sights he realises immediately there will be repercussions and decides to flee the country.

Too late. It is while attempting to purchase forged identification papers at the office of the immaculately alternative forger Meg (Mira Sorvino) that Mr Wei’s men first have a crack at offing Lee – the first of many I should add – and he and the suddenly implicated by association Meg are on the run, leaving 5 or 6 bodies in their wake already.

There are another 8 or ten bad guys dead before the ‘replacements’ even show, and all the while the detective Zedkov (Michael Rooker) – who was in Lee’s sights only the day before – is on his tail.

The Replacement Killers has John Woo’s fingerprints all over it but unfortunately none of his magic touch. Instead we have scene after scene with Lee and Meg (who kills easily and often considering she was a forger only hours previously) laying waste to the underbelly of New York in stylish ways as Mr Wei and Kogan (Jurgen Prochnow) keep themselves busy by ordering up more assassins to provide more target practice for the mismatched duo. (Apparently there was a romantic subplot where Lee and Meg got together that was scrapped as no-one could believe it.)

Meanwhile poor old Mira just cannot find a shirt strong enough to cage her C cups, thus her lacy bras are forever on display. Perhaps she could take some style advice from Chow Yun Fat, who despite being constantly on the run and under fire still manages to go through about a dozen tailored suits, wears sunglasses inside (but strangely, rarely when outside) and never has a slick hair out of place.

The Replacement Killers boasts a high body count and more spent ammunition than you can fathom, but alas can’t manage to keep the excito-meter as busy. Part of this is because Chow Yun Fat’s extravagant two guy gymnastics are largely reined in, and part is because he is forever having to keep one eye on whether Meg is about to be shot or not. John Lee is like a first person shooting game character, it is so much easier if you don’t have to worry about friendly fire or not gunning down hostages, but when you have to constantly be checking on the wellbeing of another character it can really cramp your style.

Cramps aside this film does still have style aplenty, it is substance that it lacks.

Final Rating – 6 / 10. For years I mistakenly mixed this film with another from the same era, which is why I never bothered rewatching it until now. Now I can admit my error, but I still can’t find much reason to recommend it anyway.