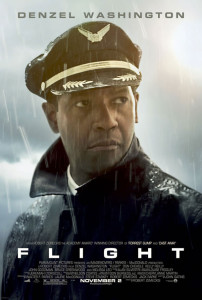 Flight captain Whip Whitaker (Denzel Washington) is an experienced and skilled pilot with many years behind the… Is it sticks? This is especially lucky given the night of debauchery he completed only hours previously, with a spicy cocktail of illicit hard drugs, copious amounts of alcohol and a hot stewardess girlfriend Katerina (Nadine Velasquez from My Name is Earl gets her gear off. And I mean OFF!)

But even Whip cannot prevent a dramatic mechanical failure that sees the plane chock full of passengers performing an uncontrolled dive straight towards earth, after only moments before working through especially turbulent conditions to find calm air.

(Already 2013 has been an eye opener for cinema goers. First Life of Pi made you swear off sea travel, then Flight may make you afraid to fly. If they come up with a film about eroding running shoes then we as a society might just become couch bound – if we aren’t already.)

A particularly chilling moment occurs when Whip orders a stewardess to voice her love for her son, so that the black box might record it as a horrific last words should they not make it.

Even though the plane crash lands and there are casualties, including Whip’s girlfriend Katerina, most on board survive with limited damage and Whip is instantly declared a hero, and given the subsequent treatment by the all too willing sensationalist media.

Upon awakening in hospital a few days later to learn of the outcome of his quick thinking, Whip is met by two people in separate meetings. The first is Charlie, the leader of the Pilot’s Union who profusely offers both praise and support, the second is Harlan Mayes (John Goodman), an associate of Whip’s who offers both alcohol and narcotics.

Whip says a firm but polite ‘no thanks’ to both and instead heads off to the seclusion of his family farm, unknown to the media and most others. But Whip isn’t totally alone, he takes along Nicole, a pretty but damaged junkie that he met only days before in the hospital.

Nicole is acutely aware of her own susceptibility to addiction and the possibility for relapse. Whip on the other hand is totally confident that he can kick his own vices, and that they have never held any control over him. This is true for a couple days…

When called into a meeting at a city hotel Whip learns that it is standard procedure for flight crews to be blood tested after incidents, and given this was an especially serious incident this took place while he was still unconscious, and after Katerina had already passed.

Between them the duo had enough alcohol and drugs in their system to send an entire football team to prison.

This is obviously an unwanted development, though Whip is told that his lawyer Hugh (Don Cheadle) is an expert in this area and that his clients ‘don’t do time’. For his part Whip argues that even though he might have been under the weather, no-one else could have landed that plane sober, a claim that is later backed up with testing.

Charlie responds by declaring a scapegoat WILL be found when millions in damages and the loss of passenger’s lives were involved. Whip is drinking again before he leaves the hotel.

With Whip drinking again – a lot – and Nicole trying to kick her own vices, the stage is set for conflict and confusion.

The film doesn’t shy away from dealing with the tough questions. For his part Denzel allows himself to appear flawed, flabby and fragile. His Whip is a polarising figure, at times you shake your head as you realise that you were starting to sympathise with this guy – then you think about every time you and your family might need to fly in the next few years.

With many years experience Whip has an amazing ability to ignore his failings and weaknesses, and an incredible knack of covering them up at a moment’s notice, as he proves in a scene where he leaves a house to be ambushed by a horde of reporters and cameras and seems to sober up on the spot.

They say that the first step to addressing a problem is admitting that you have one, and even with the evidence mounting about the crash and Whip’s continued descent into oblivion, he stubbornly refuses to acknowledge his addiction.

Denzel lives for these films. He plays Whip as simultaneously proud, defiant and scared. Even if he realises his problems he steadfastly refuses to admit or deal with them.

While the ending was predictable and the soundtrack was as predictable as a home movie (Oh he’s sad, cue ‘Aint no Sunshine’. She’s shooting up, how much do the rights to ‘Under the Bridge’ cost?), Flight is a solid drama full of good performances, and the crash scene will stay with you for a long while.

Final Rating – 7.5 / 10. Another workmanlike Denzel drama, good to see him challenging himself a little.