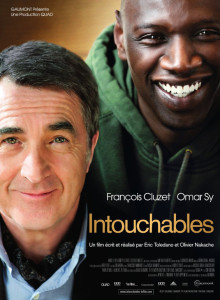 Driss is a tall, dark and handsome lad of Senegalese descent. He is irreverent, brash, talkative and charismatic. He is also possessing of some bad habits, which explains his six month ‘holiday’, and upon his return to his family home in the Parisian projects his mother tells him that she has enough kids to deal with, and Driss is turfed.

Now on the street and surviving on welfare, Driss is required to seek employment to remain on payment. This doesn’t mean he has to get a job, only apply for one, which is why he attends an open interview for a position as a full service carer. Driss walks in unprepared, disinterested and cheeky. He walks out with a job offer.

Philippe is a wealthy shut in from a proper and dignified background. He lives in an opulent immaculately appointed home with several staff tending to his every need.

Philippe is also a tetraplegic (only his head moves) as a result of a paragliding accident some years before. He is single, disagreeable and cantankerous, with a reputation for offending the help until they leave his service.

For his part while Driss does not change his outlook or demeanour he at least shows up for duty, mainly because as a full time carer he is entitled to a huge personal room of his own with all the flourishes. He flirts openly and audaciously with the female staff, and encourages Philippe to try a new tack with his female pen pal, rather than plod along with ornate written prose.

Driss is initially clumsy and unskilled but he is obviously far from dumb, and his disarming charms gradually – but awkwardly – allow him to elbow his way in.

As Philippe warms to Driss’ irreverent ways and refreshingly carefree attitude, the two spend more time together at all hours, even venturing outside the boundaries of the palatial home, with both men learning more about themselves and each other than they thought possible.

Of course given Driss’ background and Philippe’s wealth, relatives and staff grow concerned about Driss’ intentions. Philippe’s daughter is especially obnoxious around him. But Philippe is no mug, and as he grows to trust Driss the duo form a bond that goes beyond status and disregards physical limitations.

There is a great scene involving a birthday party for Philippe organised by his family. It is elaborate, sober and classy, with a classical band and a deliberate agenda. That is until Driss decides the formalities are over and turns the party into his own dance party, breaking down any semblance of formality. Philippe watches on from his wheelchair as Driss busts many moves and encourages the remaining guests to do the same, a huge smile spread across his wonderfully expressive face. I got the sense that if anyone else was that precocious Philippe would see it as an insult, given his physical limitations, however through Driss he can again imagine how it would be to throw himself about with abandon.

The film thankfully shies away from cliche and clumsiness. Driss is not framed by the evil uncle, nor does Philippe magically remember how to walk. This is not a Disney film or a schlocky Hollywood cliche. Intouchables is simply a film that shows how two people from contrasting situations and backgrounds can impact each other for the better.

Final Rating – 8 / 10. Normally I have issues with reviewing these films as a I have difficulty using phrases such as ‘life affirming’ and ‘joyful’, however both descriptors are especially apt when it comes to this film.

(This film was a special request suggested by Suicide Booth. Thanks.)

While I try to throw a joke or two into proceedings when I can all of the opinions presented in my reviews are genuine. I don't expect that all will agree with my thoughts at all times nor would it be any fun if you did, so don't be shy in telling me where you think I went wrong... and hopefully if you think I got it right for once. Don't be shy, half the fun is in the conversation after the movie.
View all posts by OGR →
This entry was posted in Film, Movie Reviews, OGR Recommends, Special Requests, Worthwhile Movies. Bookmark the permalink.