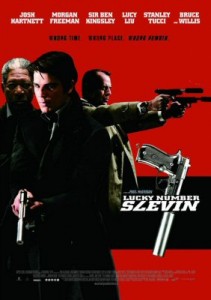 All posters are under the ‘AKA’…

The Wrong Man starts off badly but builds steam gradually. The lead off is a misguided Tarantino-lite story that is supposed to grab your attention, only it is nowhere near as clever as it thinks it is and frankly gives massive clues as to what is likely to ensue, meaning a little later BIG developments carry less weight. Oh and it’s 15 odd minutes long and dull…

It’s hard to grab the momentum back from that.

Then Slevin rolls into town. Slevin (Josh Hartnett) is a random guy in the wrong place at the wrong time, hence the title (which used to be ‘Lucky Number Slevin’. Both titles are lame, at least that one sounded interesting) staying at a friend’s apartment. Apparently the friend had a revolving door policy, as in the few hours following Slevin’s first refreshing shower he is visited frequently by people who all want to call him Nick, despite his protestations and glib dialogue even in the face of grave danger.

Bubbly neighbour Lindsay (Lucy Liu) grabs his eye, but it is the henchmen of The Boss (Morgan Freeman) who grab his attention with demands for monies owing. Money apparently that Nick owes, but Slevin definitely doesn’t have.

Then just when you – and Slevin – think you have a handle on proceedings, henchmen for The Rabbi (Ben Kingsley) show up with their own demands that run contrary to those of The Boss. The two capitalised nouns eye each other across a crowded city street from high above in penthouses, apparently neither having left their own abode for years for fear of being topped by the other.

And amid all of this and seemingly everywhere, is Mr Smith (Bruce Willis), who as Willis is prone to do in these types of films, plays a guy very much like Bruce Willis…

The plot unfolds gradually revelation after revelation, with none of them blowing me away, perhaps thanks to years of Usual Suspects and the like dulling my amaze-balls senses.

The film is reasonably clever but for mine was told in a clumsy fashion. The plot events are telegraphed, as if the filmmaker feared our capacity for rational thought. Perhaps they’re right, but if you want to call yourself a truly clever film you can’t spell out everything to the audience, give us some credit.

Liu is spunky as the perfect neighbour – pops in to borrow a cup of sugar, spends the night – in a totally unnecessary role. Hartnett lets his eyebrows do most of the work in scenes where he is meant to look confused, bewildered or bemused, which is a lot of the time, and Kingsley and Freeman are both equally good – and equally too good for the material – as the longtime rivals.

The Wrong Man is OK but only OK, it is stylish at times but not effortlessly so, in fact it obviously tries damn hard to try to make things appear easy.

And why do all of the interiors in the film look like a 70s sports bar?

Final Rating – 6.5 / 10.  In an alternate universe I can see someone really embracing this film and holding it as a personal favourite, unfortunately this crazy universe is one that I do not inhabit.

While I try to throw a joke or two into proceedings when I can all of the opinions presented in my reviews are genuine. I don't expect that all will agree with my thoughts at all times nor would it be any fun if you did, so don't be shy in telling me where you think I went wrong... and hopefully if you think I got it right for once. Don't be shy, half the fun is in the conversation after the movie.
View all posts by OGR →
This entry was posted in Bruce Willis, Film, Movie Reviews, The Grey Area. Bookmark the permalink.